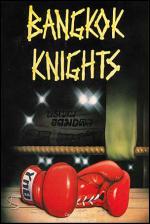 Huge cartoon style sprites and multi-directionally scrolling backdrops portray the action as the player travels to Bangkok and partakes in a kick-boxing championship. Control is achieved in what has become 'standard' fashion for beat-'em-ups: all eight joystick positions are used for different attacks, with a further eight obtainable with the Fire button depressed.

These moves range from high and low punches to shin and head kicks. What isn't so standard is the optional 'intelligent' attack system. In this mode each joystick position corresponds to two attacks: a short and long range. The program knows how far the player is from his opponent, and the computer selects the attack with the correct range needed to hit - very useful for the first-time player.

When the combatants are locked in battle, the strength and endurance meters at the bottom of the screen come into play. Strength is related to the number of exhausting moves a player has executed. Many head kicks, for example, tire the fighter quickly, while punches are far more economical. Endurance is simply an indication of how much more damage a fighter can take before he is knocked down. The winner is the first to knock down his opponent three times.

The player starts as a country boy, and proves his worth by battling a series of local hard-men. Man Chu Man is the first opponent and is fought on the edge of a high cliff. Next comes a jungle confrontation with the psychotic Bambo. Finally, the budding boxer takes a trip to the marketplace in the centre of town where that duckin' and divin' cheeky chappie, Killa Kale, is confronted. Only when these three foes are defeated can the championships be entered.

In the finals, the player contests four bouts against eight different opponents. Each of the fighters has a specialised move, including deadly blown kisses, swift kicks to the lower regions, toe-stomps, head butts, and as a light joke, Ninja Magic!

Only when all eight fighters have been disposed of is the title of Champion awarded - but it's a long and hard fight to the top.

It seems that combat games are definitely back in favour again, with International Karate+ and Renegade last month, and now Bangkok Knights.

Although not as perfectly produced as IK+, this is just as playable, with a large variety of opponents and attack styles. The sprites are amazing, they're incredibly big, very well animated, and are complemented by classic sampled sounds when blows land, or one of the fighters collapses.

I'm not too sure about the computer-aided attacks - it's a good idea, but not on a game of this type where reactions and joystick handling should be a premium.

It smacks of a 'help' mode in chess. In its favour, it does at least enable novices to learn the game quickly. Still, that's my only niggle - otherwise Bangkok Knights is superb, and shouldn't be missed.

System 3's latest release is beautifully designed, and really pushes the beat-'em-up genre to its limits. There are many features which set it apart, most notable of which is the huge characters that battle across the excellent backdrops.

Their sheer size alone is stunning, but add to this some great animation and you have a truly impressive game.

Perhaps its most appealing facet - and one it shares with its predecessor, The Last Ninja - is that it's so well produced. It's full of neat touches that make it interesting and pleasant to play, such as the screen 'fade' and the way the players appear and disappear.

Bangkok Knights may only be a beat-'em-up, but for fans of the genre it's ten quid wisely spent.

Beat-'em-up fans have never had it so good! The latest offering of Oriental violence has a humorous slant, and is very, very playable. The graphics are marvellous, with huge, beautifully animated sprites fighting across equally good backdrops.

Some of the moves are great, and I particularly like the way the fighter splats like a concertina when he gets knocked on the head. Programmer Mark Spruthers has also done wonders with the controls - as well as normal fighting mode, there's also the 'intelligent' joystick option which lets you concentrate more on dodging blows, than dealing them.

The action is nicely structured, and the intro fights before the contest give the player a chance to warm-up for the really tough guys (and girls).

Bangkok Nights is a very playable and entertaining beat-'em-up, and I thoroughly recommend you try it out.

A very playable and entertaining beat-'em-up.