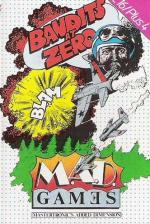 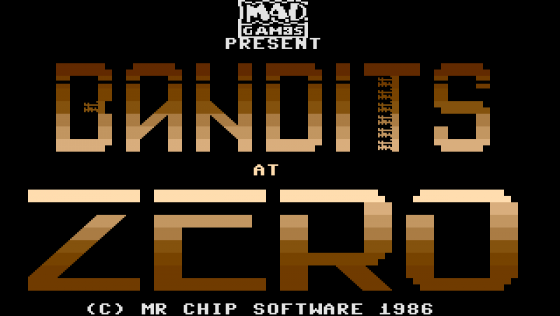 This is the first C16 game to be released under the Mastertronic "MAD games" imprint - budget games of a slightly higher quality than their usual 1.99 range, of course you have to pay an extra quid for them but, as they are usually very good - who cares?!

Bandits At Zero is an unadulterated shoot-'em-up with a large number of nice touches. The setting is near the end of a bitter war, you are one of the remaining fighter pilots. Your mission - destroy the enemy aircraft carrier. To do this, you must fly for many days over the ocean, past all the baddies' defences. It's about here that you actually start playing the game and the fun really starts.

The game is basically a left-right scrolling type with your plane able to fire missiles in whatever direction that it happens to be facing. 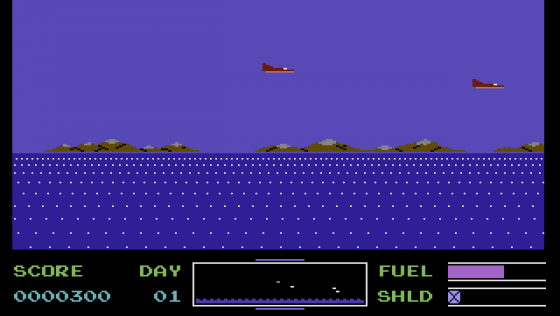 The screen is half-covered in the ocean that you are meant to be flying over. This is covered in moving dots to convey a feeling of speed - this sounds rather silly, but it it surprising how effective it actually is.

Halfway up the screen is the horizon, this starts off with islands passing by, and changes to enemy ships firing at you and such like.

The enemy is provided for by large numbers of enemy planes that appear and can shoot at you or drop small bombs that you may be unlucky enough to run into. 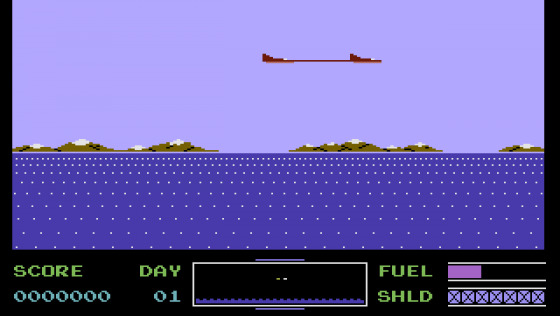 The time aspect of the game is very significant. Instead of going from level to level, you go from day to day with a night period in between (much more logical when you think about it really!).

Towards the end of the day, the sky darkens and the enemies go home for tea (I think that's where they go, they seem to move off pretty sharpish though - I supposed they could be in a hurry to catch <i>Eastenders</i>, but I'm sure that even this enemy couldn't have that much bad taste!).

When night has fallen proper, your tanker flies up to you under the cover of darkness. To dock, you must fly up to it very slowly from behind, a refuelling line then extends.

It can take until morning to refuel, though you can break off early, this isn't advisable because you are rewarded with an extra shield for refuelling completely. If you hang about until morning though, you are an easy target for the enemy planes and ships.

This is a very simple game to understand, with some good action and gameplay - especially on the later levels. The graphics are excellent, especially for the memory starved C16.

This is an excellent addition to the MAD range, and is worth the extra pound about Mastertronic's usual (extremely low) price. It is good to see the pioneers of C16 software are still keeping up the good work.

The graphics are excellent and this is a very simple game to understand, with some good action and gameplay - especially on the later levels. 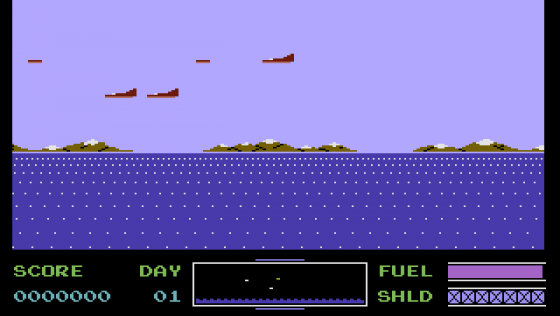