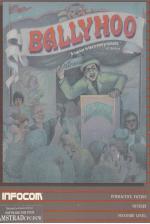 This is Infocom's latest gem, hot on the heels of Spellbreaker and Wishbringer. It's essentially a who-dunnit, but the setting's an unusual one - as you'll see in a minute. However, and it truly pains me to say it, I do not rate this particular game as highly as other Infocom releases.

That's something of an event in itself, since normally Infocom games draw unqualified praise and each new release is (unbelievably) better than the ones before. Ballyhoo, it must be said, was a slight disappointment. Moreover, I'd go further and say that at £28.70 you might be better off buying one of the cheaper range of games - Sorceror in particular.

Ballyhoo is set in the world of the circus, though it's a far cry from the glamour and razzamtazz that one normally associates with it. This particular circus boasts more degenerate wild beasts in the staff quarters than it does in the menagerie, and you'll have to outwit them all if you are to survive.

The plot itself is pretty straight-forward. As a devoted circus fan, you stick around after the show and happen to overhear a conversation that leaves you seething with righteous indignation. The Circus Owner's daughter has been kidnapped and (worse still) the imbecilic private eye who is taking charge of the case looks like being a disgrace to your hometown at best and a negligent crook at worst.

Enter yours truly, after the show, with nothing but 12 dollars in your hand, to save the day by tracking down the little lady and earning your just rewards.

As with most Infocom games there isn't a large number of locations in this game - it's what happens in each one that counts. Once the circus is finished, you can try wandering off into town, but the program very firmly calls you back to where the action is. And there's plenty of it - once you've equipped yourself with a skeleton key and a ticket to the show, you find yourself in all manner of sticky situations. If you're not sweating it out in the lions' cage, you're trying to climb over the Circus Fat Lady ("The slope's too steep", complains the program), or carrying on a conversation with someone who's simultaneously two different people - half-woman, half-man and (I reckon) half crazy.

As far as actual gameplay is concerned, the program offers all the usual Infocom features, including dumping script to your printer, altering the 'verbosity' of the location descriptions, and, in Ballyhoo's case, the OOPS function. This is a new command that enables you to persuade the program to accept a misspelt word, and as such can be quite useful and shows the case Infocom takes over their games. Should you mistype a word, as in:

and the program replies 'I don't understand the word "migget"', all you have to do is enter OOPS MIDGET and the program amends your command and carries on.

There is an almost bewildering number of command structures for you to play around with, including the now familiar (since Suspect) "Tell me about the..." as well as the possibility of questioning characters with "Who?", "Where?" and so on.

Puzzles abound, but to be honest I felt there was something slightly lacking in the game. Of course you need to put this in perspective - a below-average game by Infocom is a world-beater by many other software companies' standards - but nevertheless I was definitely conscious of the program's failure to 'grab' me to quite the same extent as, say, Wishbringer did. I don't know whether it was the occasional failure to pay attention to detail (even a spelling mistake in one place!) or simply a matter of personal taste, but there you are. I never thought I'd find myself bestowing anything other than rapturous praise upon an Infocom game, but I suppose sooner or later the letdown had to come.

The truth may be that, when you start taking about games as complex and ambitious as Ballyhoo or Wishbringer, the usual rules of software criticism fall down and it all reduces to a matter of personal taste. Perhaps I'm just not out for life under the big top...

I never thought I'd find myself bestowing anything other than rapturous praise upon an Infocom game, but I suppose sooner or later the letdown had to come.