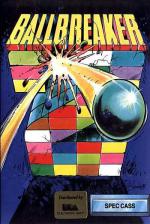 You'd think that the software industry would be fed up with Breakout by now. You know what I mean, all these games involving you controlling a bat which is used to knock a ball into some bricks to destroy them. No matter what the plot it, no matter what the name is, they almost always look the same. I say almost, for yes, there is one that is different. Ballbreaker, from CRL, was to rewrite history with its revolutionary 3-D view and added extras. Ballbreaker 2 is the sequel. Frankly I think it's not so much a sequel, but more a continuation.

The game is played in a series of courts, all viewed in pseudo 3-D, with the nearest edge of the court parallel with the bottom of the screen. No time for fancy isometric stuff here. The bricks are piled as an upright wall at the left edge of the court, and your bat is positioned right at the opposite edge (that's the right edge, you may be pleased to know), and is right on the edge of a very long drop, which will be the fate of the ball if you aren't quick enough.

The ball then drops on to the screen from somewhere above and bounces quite realistically. Note. This is the only time that the ball leaves the floor. Now, the more intelligent of you might be thinking to yourself, "Wait a mo. A moment ago this Dillon chap said the bricks are piled upwards. If the ball doesn't leave the ground, how are you meant to get the high up bricks?"

As you bounce the ball around the screen it will hit a brick or two naturally. That brick then disappears and, here's the clever bit, all the bricks above it fall down. So, a pile of 4 bricks would be reduced to 3. Now, with that thought in mind, and the fact that there are only about 20 bricks on any one screen, doesn't it sound easy? Yes. Tony. But a disease remains. One that has lasted all eternity. It is, The Last Brick syndrome. You know, when you've cleared the whole screen but one brick is left, and you spend ages trying to get at it, but you can't hit it, and you go to your Doctor, but he/she can't prescribe anything, and you go slowly mad? Ballbreaker 2 has that problem, but it also has a cure. You are armed with a small number of missiles which you can use to shoot the bricks. And everything else that emerges as gameplay progresses like the little monsters that hide on the top of bricks and then rush at you when you knock the bricks out.

The game isn't too hard, once you've got the hang of it. The 3-D effect can be confusing at first but perseverance soon pays off. A nice idea very well implemented, though if you have the first one, I wouldn't advise you to buy it.

An old idea with a fresh twist of lemon. Nice but a lot like Volume 1.

An old idea with a fresh twist of lemon. Nice but a lot like Volume 1.