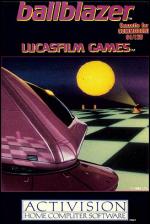 Many centuries have passed since the Great Madness, a time when war was at its most rampant and horrific peak. A multitude of great space battles were both won and lost, but few survived to revel in any glory. That was centuries ago and man has since learned from his mistakes. Peace now reigns and the only battles fought are those on the grid of the Ballblazer playfield.

This future sport was one of the few good things to come out of the war and was actually derived from military training exercises. In preparation for deep space combat, budding recruits had to get used to the rapid changes in direction of acceleration experienced when performing manoeuvres in space. This was done in the form of a rigorous simulation which soon developed into the greatest sport of all time.

Ballblazer is deceptively simple in its conception and appearance. It can be likened to a futuristic game of football with only two players. The playfield consists of a grid, 55 squares long and 21 squares wide, with a set of goalposts, or goalbeams, at both ends and a surrounding electroboundary. The boundary is invisible to the human eye and is used to keep both player and ball within the grid. It can also prove a useful aid in play, allowing players to perform such subtleties as 'off the wall' angled shots. The ball, or plasmorb, is a sphere of pure energy that floats above the surface of the grid. Once it has been injected to the playfield, the battle for possession of the plasmorb is on...

Both players control a device known as the rotofoil - a form of 'shuttle' with a surrounding 'pillow' of energy, or forcefield, used to capture, 'dribble' and 'shoot' the plasmorb.

There are in fact three 'pillows': the first and outermost is the bumpfield, protecting the rotofoil from all possible external damage. The second field, the pullfield, is only activated when the plasmorb is within a certain range, where it automatically draws in and centres the ball. The player can now go for goal.

The innermost field is the pushfield: a touch of the fire button sends the ball flying forward at high velocity and the rotofoil recoils in the opposite direction. The pushfield can also be used to blast the ball away from an opponent, leaving it free for the taking.

Rotofoils are controlled with a joystick - left, right, back and forward, all give acceleration in their respective directions while the fire button activates the pushfield. Turning is computer controlled and gives rise to one of the rotofoil's most useful and confusing properties - that of roto-snapping.

A rotofoil will always face the ball unless the player in question is actually in possession, in which case the rotofoil 'snaps' round to face the goal. So too does the player's view, which can prove incredibly disorientating at first, but not so much so that the concept is never understood.

For every goal scored, a certain number of points are given -- the value depending upon how far the player is from the goalbeams when the ball passes through them. If, for instance, the ball is literally pushed through the goal, then only a single point is scored. A maximum of three points can be obtained for an over-the-horizon shot. This is where the player can't actually see the goalbeams when the ball passes through them - a difficult or lucky shot? It all depends upon the skill of the player...

Should a total of ten points be scored before the previously determined time limit expires, the opposition is 'wiped out' and the game is over. If the scores are level when the timer reaches zero, the game goes into overtime and the first person to score is declared the winner. The length of time a game is played over can vary between one and ten minutes, but wherever you go in the universe there's only one regulation Ballblazer game - three minutes, two players, one victor...

Ballblazer is simply the one-on-one sports simulation. It's just you, alone, against another player (whether human, robot or alien makes no difference). No external interference to worry about - all you have to do is outwit your opponent using every ounce of skill and reflexes. The graphics are incredibly effective and give a superb feel of acceleration and speed. I must confess to being very disappointed with the sound -- I'm sure it could have been vastly improved.

To appreciate the game it really has to be played a few times. The way that the rotofoil snaps round continually can be terribly confusing to some first-time players and the game could well prove offputting to those who 'walk into a shop, take a quick look and buy'. It does take a while to get into, but it's worth it - becoming a truly proficient player will take a long time - it is a sport after all.

Once the basic principles of the game are mastered, you can start to work on individual tactics - it's here that the game really comes into its own. Ballblazer is designed so that you can find the best way of playing. It's funny really, how the simple games usually turn out to be the best -- Ballblazer certainly is one of the simplest and assuredly the best.

Ballblazer is a truly classic game and as a sports simulation it is one of the best to date. The idea is brilliantly simple and the presentation is outstanding. Technically, Ballblazer isn't as impressive as Fractalus or Koronis Rift, but it is certainly Lucasfilm's most playable game to date. The graphics don't look that amazing when static, and it's only on seeing and feeling them move that the whole effect is brought home.

Ballblazer also includes the best computer opponent I've ever seen in a game. The different grades provide a decent challenge to any games player, whatever their level of skill. This is definitely one of the games of the year and if by any chance you do get bored, the cassette inlay scenario should provide some entertainment.

There have been some stunning sports simulations released on the C64 this year, but none of them are in the same class as Ballblazer. The idea is one of the simplest and most original ever conceived for a computer game - and it works magnificently. With the exception of the sound, everything about Ballblazer is near perfect. The graphics are smooth, fast and very effective with not a split screen glitch in sight! Unfortunately the sound effects are quite weak, but the music is fine and makes up for this small deficiency. The nine computer-controlled Droids make fierce and compelling competition, but the two-player head to head game holds far more of a lasting interest. Ballblazer is the computer games equivalent of such classic sports as football and tennis, and is without doubt the best release this year.

Presentation 97%
Slick in all aspects.

Lastability 98%
Compulsive sports action whether you play against computer or human opponents.

Value For Money 97%
A down to Earth price for such an out of this world game.

Overall 98%
The best sports simulation to hit the 64 yet.