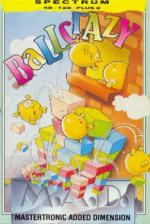 Erik is a bouncing ball, obsessed with changing the colours of the blocks that share his screen. This he does by bouncing upon blocks at the bottom of the screen; with each bounce the block's colour changes, and when it matches another block at the top of the screen then Erik can move sideways to adjacent bouncing grounds. There's a point for each bounce.

When all the five blocks that make up a level are the same colour, another level is automatically introduced, and Erik repeats the exercise.

But things aren't that easy for this cherubic rotundity. He's chased by a collection of puncture-producing articles - rings, chain links and boxes - released after a short countdown.

Erik can defend himself with fish-shaped bullets which he fires upward from his head. And he can replenish his ammunition by collecting the falling bullet canisters. He can also stop his bouncing to avoid the chasers.

Bonus objects keep falling on his head: a cylindrical satellite (nicknamed Ring On A Thing) gives temporary protection against chasers, an air cylinder gives an extra life, a 'tick' corrects the colour of the present level blocks, and a five-pound note increases points.

When Erik has successfully completed four levels the next of the eight backgrounds is introduced and away our bouncer goes.

Control keys: A/S left/right, L to stay down, ENTER to fire
Joystick: Kempston
Use of colour bright, and plays an essential part in the time
Graphics: straightforward, but with good ball movement
Sound: some spot FX
Skill levels: one

'Judging by the inlay, I thought this was just another Q-Bert-type game; and the basic idea of jumping on blocks to change their colours is the same. But a few novel features make this highly playable. Graphically Ball Crazy is nice - the little ball springs around the screen beautifully with a big beam on his face, and the colour scheme is pleasing, with very little colour clash. Playable it is, but after a while it gets a wee bit tedious.'

'Ball Crazy grew on me. At first the cute graphics were the only things in its favour, but after a couple of hours I was enjoying it. Ball Crazy isn't very addictive but its playability is fine, and the, only major fault I can find is that Ian Phillipson plays it better I can.'

'Certainly an original idea, this. The cartoon-esque graphics are quite passable, and the sound is reasonable. The game is simple to get into, and after a few minutes you can be jumping round the screen quite happily. I didn't find it very addictive - it lacks depth - and there's not much to do on later screens. A mildly refreshing game to cure you of interaction-game boredom.'

A mildly refreshing game to cure you of interaction-game boredom.