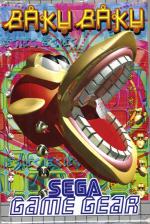 What kind of problems would the monarchy of the Baku Baku world have compared to our own beloved royal family? Well, let me say that they don't catch the gardeners growing cannabis plants in their sheds, and they don't have some ginger tart marry into the family who then gets caught having her toes being sucked!

Oh no, the only worry for the King and his family is finding a new Royal Zookeeper. Anyway, this new position is up for grabs and needs filling (a bit like Diana) and it just happens that you're the person for the job. You play Polly, a young lass who has a way with the animals, and your aim is to work your way through the kingdom beating off all the other applicants for the job, before facing the royals to prove you are worthy of the title. Only then will you get your dream job, the accolades of the King and Co. and the end of the game, but that's not as easy as you may think.

Japanese puzzle game with cute characters, #753. Will be simultaneously reeased with the PC and UK Saturn version.

Match up the animals with their favourite foods and avoid filling up your screen completely, or you'll lose the game.

Something that didn't appear in the Saturn game which has popped up in this version is the assword system. After every game you win against the computer, a password screen appears. But, instead of being the standard words or numbers for the codes, each one consists of four icons, all taken from the characters in the game. Here are a selection to help you on your way in the normal level:

The object of the game, if you have been locked away for years, is to match up the various objects with the animals that like them, i.e. banana and monkey, bone and the dog, etc. The more you can eat in one line, the more points you rack up, and the more blocks will fall over onto the other side and your opponent, so they lose quicker. It's all very sophisticated.

Well, not quite. The Saturn version had the advantage of having both players on-screen with simultaneous action. The Game Gear version obviously can't handle all of this, so the programmers have compensated by putting a miniature version of the opponent in the bottom right corner, just so you can glance over at what is going on. You won't actually be able make out what is going on, but it's helpful in times of need.

Yes! This is what we want. Proper Baku Baku action. In my opinion, Marcus underrated the Saturn version, but even though I was surprised it made the step down, it still has the playability that made the other game so appealing.

Although the graphics have obviously been toned down, they still do mor than enough to impress, and the cheesy tunes that you can't help humming don't seem to suffer from the crap GG sound chip (wasp in a bottle and all that).

The biggest let down is the amount of time the game takes to drop the blocks. When a line of food is munched, the other blocks above it don't fall down until the animals have finished eating. This means that when blocks above and below need to be linked, it won't happen, often leaving lots of blocks that may have otherwise been eaten. However, this is still an excellent puzzle game, and awesome in two player link-up.

This bulemic's nightmare is a big fave in the office - whilst I personally prefer Bust-A-Move, I nevertheless relished the chance to give this handheld version a spin. Playing without the benefit of this game's link-up option, I probably only had half as much fun as I would have had on the Saturn version.

But that's still quite a lot of fun. This is just as cutesy as before, with enough cheeky chomping to send Claire squealing round the office. The game is only marred on this format by annoyingly sluggish food demolition, and a general slow-down in pace. A compromise then, but this still comes highly recommended to all budding zookeepers.

Graphics 86%
P. Clear and crisp. The characters and their relevant items of munch are clearly defined.

Animation 80%
P. The munching animals pass the time...
N. But had to be made a little smaller.

Music 89%
P. Top tunes. You'll be humming them in your sleep.

Effects 83%
N. Couple of chomping noises, a thud every now and then and that's about it.

Playability 90%
P. So addictive it's almost unbelievable. The two player mode will destroy your social life.

Lastability 87%
P. As mentioned, hours in two player mode.
N. Seems to be a tad too easy in the one-player game, however.

Overall 88%
Although this lacks in one player mode, there is still enough here to keep you addicted. The best dying breath Game Gear owners could hope for.