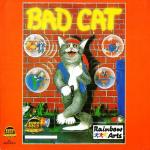 The year is 1984 and the feline equivalent of the Olympic Games are about to take place.

The player takes the part of 'Bad cat' - street-wise Tom who travels around the city, competing in the game's four events.

The first venue is the city park, where Bad cat walks, crawls, jumps and somersaults his was across a hazard-filled course. At the finish, he collects a set of keys, allowing him to start a motorcycle, which carries him to other venues around the city.

Between events, a local map of LA appears with the feline motorcyclist appearing as a small yellow dot. The next location is displayed as a red, pulsing circle, and Bad cat is guided across the landscape, avoiding the patrolling police cars to reach the next venue. Success is rewarded with a bonus, and beach balls are collected along the way to increase score.

The second game takes place in an open-air swimming pool. The hero jumps between two floating 'bumpers' while trying to punch geometric figures from a board at the top of the screen. A large display shows the next target and the score mounts as the shapes are successfully dislodged.

A sewer is the unlikely setting for the third event, where Bad cat negotiates water and falling blocks. Again, rotating balls are balanced upon, and attacking rats are kicked and punched into the murky stream.

Bad cat faces his final challenge in a pub, where he plays a head-to-head 'bowling' match against a bulldog. Standing on opposing sides of a five-lane alley, both contestants hit each other with bowling balls. Every time a character is hit, he goes to the bar and drinks a glass of beer, making him less easy to control.

After the last event, the total scores are displayed and the game ends.

The average graphics and average animation are ruined by the awful control methods - balancing on the ball is very hard, and often the slightest mistake spells doom to the hero.

The main character is neither cute nor appealing, being a curious combination of an arthritic homo erectus and a grey semi-feline blob. The pointless interludes where you guide a tediously uncontrollable and slow cursor (your cat?!) around a blocky map backdrop in search of a flashing red spot provided my greatest excitement: getting squashed by a car that was as well-drawn as those in Grand Prix Simulator (!).

There is nothing new to inspire, nor anything particularly brilliant to draw you back - unless you like staring at title screens.

This latest German offering suffers from contrived and unrewarding gameplay and overcomplex control methods. The graphics are smart, and the package is well presented, but polish cannot being to make up for poor playability.

Only the first event really enthuses to any great degree, and even that proves annoying after a short while due to the precision required to complete the whole course.

Thereafter, the events simply get worse and worse, culminating with the totally pointless 'bowling' event.

Defeating the computer opponent is incredibly easy: just stay in one lane and bowl continuously. That's it - game over.

To be fair, Bad Cat isn't completely worthless: the badly translated German instructions are easily the most hilarious I've ever seen!

Presentation 71%
Supports a four player game, but is otherwise limited. The multi-load is intrusive, but bearable.

Graphics 72%
Colourful backdrops, but the main sprite is a little rigid in his movement.

Hookability 57%
Moderately addictive to being with, but the awkward controls ruin the enjoyment.

Lastability 27%
Once the events have been completed, the desire to return is minimal.