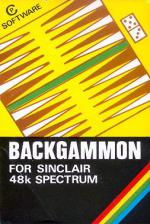 Now here is a game I have never played, so I was looking forward to having a go, especially as it is described as a version particularly suited to beginners. That may be so, because I soon got into the game and rather enjoyed playing, although you can only play against the computer, which is a pity.

A friend of mine tells me that this is not quite the correct game because there is something called a double dice option missing from this version. He showed me the game as written for the Spectrum by another firm, and there was a difference. Whether this would deter the serious player from playing this version I couldn't say.

Seeing the two versions enabled me to compare the two displays, and this version, in my opinion, has a more pleasing display, although it is slower in setting up the board. Bearing in mind the differences mentioned I will leave it to your judgement as to whether you would like to play this simplified version or not.

I soon got into the game and rather enjoyed playing, although you can only play against the computer, which is a pity.
Logout