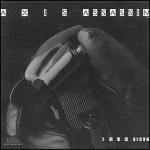 Axis Assassin is a shoot-'em-up in the most traditional of standards, its sole aim being to destroy everything and stay alive, kill or be killed.

The battle is fought against the Master Arachnid (a sort of big cheese spider for those who don't study biology), controller of a swarming army of marauding killers out for your blood. The game takes place on the MA's web, which looks more like a grid from the Atari arcade game Tempest than a spider's residence. You can move up and down the grid freely and jump from lane to lane (unlike the arcade game).

At the commencement of a screen, the playing area is set up and a Web Spinner weaves a set of webs across the grid lanes. Yon can't go through a web but you can shoot them. If you don't, then your movement gets rather restricted. After the Web Spinner's job is done then the onslaught of the spiders begins...

The essential thing is to stay alive, not so easy since there are several different types of gruesome zooming up and down the web at mega-speeds. The Web Spinners make an appearance in large numbers and constantly weave webs in an attempt to trap you in one lane. Robot Drones whizz up and down the lanes trying to ram you and if they do then you lose one of your five lives.

Kamikaze Hunters patrol in a similar fashion, but they switch lanes and try to track you. On harder levels they do this at such high speed that dodging them is next to impossible and reflexes are the only thing to guarantee your survival.

Spores travel the length of the lanes and split into two Mutant Guards that zoom around and make a general nuisance of themselves. The most deadly sort of denizen though, is the Xterminators. These are indestructible and can only be dodged.

There is a useful level-select option that allows you to choose your starting screen. As you progress through the levels, the grids start to change pattern, ranging from U-shaped ones to zig-zags. On very high waves the whole grid blacks out and the only things you can see are the aliens.

Being a long time fan of the arcade game Tempest, I was more than happy when Axis Assassin came along. Although the graphics aren't exactly amazing, the speed of action and gameplay make up for this. The Web Spinners start to move pretty fast on the later screens, making the game very tough to play. The option to start on higher levels, as in Tempest, keeps the challenge constant since there's no need to muck about on the lower levels once you've conquered them. All in all, quite a nice version of an extremely good game.

I didn't find this version of Tempest particularly enthralling since there is such little variation in gameplay other than differing web layouts. The vector graphics are rather blocky and despite being generally fast, I found that the ship became quite sluggish on occasions. It is said that you look only as old as you feel, but Axis Assassin actually feels as old as it looks.

When I first saw the game, I instantly thought it was going to be a clone of Atari's Tempest, one of the all time classic shoot-'em-ups. On further playing, I discovered that it was similar, but some of the gameplay elements had been changed. Instead of just sitting at the top of the tunnel like in Tempest, you now can move up and down it - vital, because if you stick at the bottom of the tunnel you're very likely to get destroyed by the marauding aliens. There's a level select at the beginning of a game, like the arcade game, and some of the aliens have similar properties to their arcade counterparts. I really liked the game - it's a great shoot-'em-up and one that gets incredibly frantic on higher levels.

Value For Money 67%
Cheaper than the average game.

Overall 70%
Best version of Tempest on the C64 yet.

The best version of Tempest on the C64 yet.