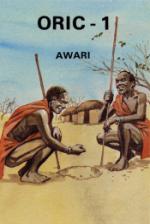 Awari is a game with origins in tribal Africa, where it was played with sticks and stones. The rules are very simple, but the strategy is complex. So it makes a fascinating computer game for those who prefer to use their wits rather than their reactions.

In this version, the display is clear and colourful, and the pieces move about at great speed once you or the computer select a move.

Movement is a little too fast to allow a novice to appreciate what is happening, though this is particularly relevant when, as sometimes happens, the computer gets two moves in one turn, and both moves are taken at once. But at least the computer's move decisions are made in seconds.

The two pages of on-screen instructions are clear. However, in pressing Space to move from page 1 to 2, delay in removing your finger from the key, and you miss the second page. The only way to get it back is to re-load the program.

The computer's move decisions are made in seconds.
Logout