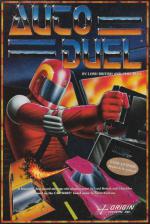 When I took over the Zzap! strategy reviews I expected the games I'd be sent to be different, but I did not expect to find a toolkit in one. And I don't mean a software toolkit, I mean a miniature set of screwdrivers with a tiny hammer and a tiny wrench tucked together in a neat plastic pouch. This I suppose is called imaginative packaging: though the kind of cars AutoDuel deals with are likely to need a somewhat larger maintenance kit.

Apart from the toolkit, the AutoDuel package offers a substantial 32-page rulebook and a colourful fold-out road map - oh yes... and a disk. The game incorporates an arcade element which is central to the gameplay. Therefore strategy gamers who have no patience with games which demand a degree of joystick-waggling will not be enamoured of this release.

The setting is the kind of arid, technological, aggressively bleak future that Americans seem to anticipate. The roads between the major 'fortress cities' have become almost impassable unless you're driving an armoured tank, and the favourite spectator sport is combat to the death in the autoduelling areans. Also, the only way of transporting goods is to pay freelance couriers to battle their way along the motorway. Into this environment you arrive, with the open-ended ambition of earning a lot of money, building up a nice car, and gaining repute.

You start out as a raw, untested candidate for greatness, with a small amount of money and no vehicle to call your own. The game opens in New York, with fifteen other cities to hit later on; you are first of all asked to create a character for the driver by spending 50 points between the three skills of driving ability, marksmanship and mechanical ability. The character of the driver is therefore very simply defined, the real complexity being reserved for the much more important creation of the car.

A poor driving ability means that the car can become impossible to control properly with the joystick if tyres blow, and low marksmanship makes it difficult to hit an opponent's car. This is an uneasy interface between game reality and physical reality. In an arcade game (and lots of sequences in AutoDuel are clearly demanding an arcade-style approach), the interaction between the human player, the joystick, and the movement on screen in a real event. A strategy game exists much more in the imagination, which is why strategy games can get away with bad graphics. Character statistics relating to ability very definitely belong to this imaginative sphere, and when they get between the movement on-screen and the player's own, real developing ability at manipulating the movement it is irritating.

This is the background to a more serious objection. The graphics in the action sequences are not at all good. The car you drive, no matter how complex on paper, always looks like a very simple Mini viewed from above. The arenas in each town are identical, consisting of stick-like fencing and rocks with a lot of blank space. But when you hit the mean hard motorways of the 21st century, it's disappointing to find that the landscape looks rather like a child's drawing. Nice white fences, little cows by the roadside, well-kept homesteads and trees conspire to ridicule the scenario.

As the game's object is to build the best car you can and win autoduelling championships, the immediate aim is to make money. I found the easiest way to do this is to bypass all that dangerous and uncertain autoduelling and head by bus for Atlantic City, where you can take part in a very lenient and generous game of Draw Poker! But the proper way to make your first few thousand is to take part in the amateur night event at the arena. The prize is $1,500 and a couple of points of prestige. When you have your own armed and armoured green Mini, you can take part in the Division Combats and the highly dangerous City Championships.

The other main way of making money and gaining prestige is to run courier tasks for the AADA. Visiting their buildings offers the player a choice of four different tasks every day. This seems to me one of the most interesting aspects of the game. If you car isn't big enough and your prestige isn't high enough the AADA will have no hesitation in refusing you for an important job.

Most of the loving care in the design of this game has gone into the car specifications. There are seven basic types of body design, four chassis modifications, three kinds of suspension, and four grades of 'power plant' to choose from. All of these affect how much the vehicle can carry, how fast it can go, and how easy it will be to handle. After that, there are tyres, weapons and armour to decide on, and there are twelve weapon types to choose from. It's just a pity that, when your armoured tank rolls off the efficient production lines, it still looks like a green Mini.

These and other touches of variety (such as the ability to salvage cars you've destroyed and sell the scrap) seem to promise a substantial game. AutoDuel does have a feeling of solidity and of things to do and places to go, but there are objections whih may be more than superficial. The enemy cars in the amateur night contest are always in exactly the same place every time, in every city. It is depressingly easy to get killed very suddenly, and the only life insurance you can take out is to have a clone made; which is so expensive that it's hardly worth doing until you've built up a substantial fortune. Frustration dominates over enjoyment, and I find it difficult to believe that the gameplay settles down later.

But the potential for expansion in a game which is so difficult to get started in is tantalising. You can own up to eight cars, you can track down top secret missions for the FBI, and you can become king of the arena. But there is no grand object, something which I think all games should have, however excitingly remote it may be. AutoDuel is a lonely game.

Presentation 85%
The toolkit is useful for writing plugs. But having to change the disk round so often is rather boring.

Graphics 30%
Worse than poor, because they defeat the atmosphere.

Authenticity 50%
Despite the beautifully detailed car specifications, the game does nothing to conjure up the required atmosphere.

Playability 70%
Although it's frustratingly difficult to get started, it's easy to spend a long time trying.

Overall 70%
Some good points and the promise of lasting play - but the serious drawbacks might become too irritating in the long run.

Some good points and the promise of lasting play - but the serious drawbacks might become too irritating in the long run.