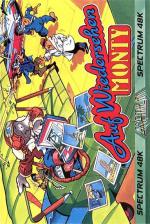 The software industry seems to be getting a bit nostalgic at the moment. First, Imagine and Gremlin came out with updated versions of Breakout (and CRL have got one on the way too). And now Gremlin have brought about the return of the platform game and Monty Mole. What's more, these old games still seem to have a bit of life left in them, and they're giving a lot of the more advanced software titles a run for their money.

Having survived his last couple of adventures, Monty has decided to go off on a bit of 'round the world sightseeing'. the eighty screens of Auf Wiedersehen Monty are named after various tourist traps and the screens are arranged in roughly geographical order to give you a rough idea of how to find your way around. The titles of a lot of the screens are irrelevant really. Though some of them do bear some sort of resemblance to the places they're named after (the Pyrenees screen, for instance, is a bit hilly and the monster-sprites are shaped like bulls), most of the screens are just an excuse for a lot of platforms and ladders, crushers, sprites and deadly spikey things that have to be avoided at all costs. And it's all good fun, as you might expect (not terribly original, I have to admit, but fun all the same).

Of course, a platform game's not a platform game without a few dozen objects to collect, tucked away in various awkward corners. In line with the game's globe-trotting theme, the main thing that Monty has to collect is a number of Eurocheques which bump up his money score, but there are also a lot of other objects which have different properties, and it's up to you to find out what does what.

This is where the names of the screens can come in useful. For instance, there's a wheel which might not seem like much use on its own, but when you take it to Monaco (for the Grand Prix), you'll gain extra points. And there are also objects which have some effect on Monty himself - extra lives, alcohol which gets him drunk, even a cheat mode if you find the right object.

It doesn't require state-of-the-art programming skills to write a game like this, but it does take a lot of thought to get the design of the screens "right". Many a platform game has died a death because it was just too hard to be enjoyable, but Gremlin have gotten the balance just about right here. The game is hard enough to be addictive and a little bit infuriating, but if you can't get at all the objects on the screen, it's still reasonably easy for you to move on and explore another part of the game so that you don't get bored by dying in the same place over and over.

The graphics are good - all the sprites are quite large and smoothly animated, and Monty responds well to both keyboard and joystick control.

I've always enjoyed platform games and Gremlin's Monty series has provided some of the better examples of the genre. Apart from a few pretty feeble budget titles, there hasn't been a decent platform game released for a while, so Monty's return is very welcome. Now, what with the return of Breakout and Monty Mole, the only question left is - "When does The Return Of The Jet Set Willy arrive?"

The graphics are good - all the sprites are quite large and smoothly animated, and Monty responds well to both keyboard and joystick control.