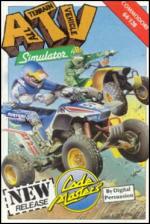 ATV Simulator is a split screen race game where one or two players take control of an all-terrain vehicle and attempt to score the fastest times over a series of off-road courses.

Each course is filled with hazards which the vehicles negotiate. However, if an obstacle is tackled too fast, the driver is dismounted and precious seconds are lost whle he remounts. If the timer reaches 30 seconds before the finishing line is crossed, the game ends.

Comparisons to the Kikstart games are unavoidable when looking at ATV Simulator, since both the screen layout and game style are very similar.

Unfortunately, the Code Masters offering provides a good deal less enjoyment than did its predecessors, practically bordering on the unplayable. The game looks awful, with bland backdrops and an incompetent ATV and rider.

Control of the ATV is overly simple: consisting of fast, slow and 'wheelie' - it certainly doesn't simulate the ATV's I've been on. Generally, a rather shoddy program. To be avoided at all costs.

This should be called Poor Man's Kikstart Simulator, as it tries to emulate the classic scrambling formula, but fails completely. The split-screen action could have been fun, but unfortunately the control method is very poor, and all you have to do is tackle obstacles at the correct speed.

Once you know which speeds to go at, you've mastered the game. The graphics are very bland, and the sound unremarkable. Kikstart I and II (complete with editor) are both available at the same price - I know which ones I'd rather buy.

Presentation 82%
One of two player options, and generally thoughtful.

Hookability 51%
The two player mode is fun, but the action isn't particularly exciting.

Lastability 36%
The courses are samey, and consequently the gameplay is ultimately expensive.

Overall 42%
A somewhat hackneyed and dull version of Kikstart.

A somewhat hackneyed and dull version of Kikstart.