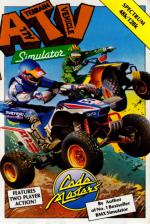 Put on that crash hat, squeeze into those squeaky leathers and buckle on your boots - it's time to scramble aboard your chubby-wheeled All Terrain Vehicle (ATV) and head for the roughest, toughest, meanest scenery you can find.

You can take runs against the clock on obstacle-littered courses that spread themselves over sand dunes, grassy land, snowscapes and dirt tracks.

Many obstacles require careful negotiation - if your ATV gets stuck you lose valuable time attempting to free its wheels. Speed is crucial, not only in your race against the clock but also in determining your success at negotiating hazards. Fastest is not always best, Tackling even the most innocuous obstacle, such as a small rock, at the wrong velocity or in the wrong manner can rip your grip and buttocks from handlebar and seat and propel you in an elegant swallow dive through the air.

And there are some strange obstacles which you have to drive into to believe...

The ATV can do wheelies, which help it climb steep surfaces, and jump, which provides you with extra lift as you tackle a ramp.

But sometimes not even such skilful manoeuvres can save you from a tumble. If this is your fate, recover quickly, run back to your vehicle and remount it with all the daredevil panache you can muster after a bone-jarring fall.

If you manage to complete a course within the time allowed, and with sufficient fuel remaining, you move on to the next visceravibrating track.

'Surely the programmer intended this as a mickey-take of all the other racing games? Perhaps not, but I haven't had such a good time trying to complete six laps of lunacy in ages. There are some novel uses of hard surfaces which make life hell -ever tried to get a four-wheeled bike off a beach ball that's being bounced on the nose of a seal? My only real niggle is that ATV Simulator is much too easy; there should be a lot more levels to give it that extra bit of lasting appeal. I wouldn't pay two quid for a game that would only keep me occupied for a couple of hours.'

Wow! It's Kikstart on an ATV. Control is a bit hard at first but once you've got the hang of it the game's great fun. The graphics are adequately defined and colour is used well but the sound isn't very good there's a nice tune on the title screen and between levels, but only gritty spot F% for the motor sound. There's also a gameplay problem with the time limit: climbing back onto your vehicle is very time-consuming. ATV Simulator is a thoroughly addictive game and a favourite of mine because I'm the only reviewer that can get to the water level. HA!'

'Well, it's about time someone had a go at Kikstart on the Spectrum - and though this isn't as playable as the Commodore classic it certainly has all the humour. Where ATV Simulator fails is in the number of 'impossible' situations and the frequency with which they appear - many times I lost control of my bike, or the ATV just reappeared on the screen out of my reach. The animation of the driver and his vehicle is brilliant and realistic, especially when you're trying to pull the bike out of a hole. There's no doubt that lots of time has been spent making ATV Simulator aurally and visually appealing, but you've got to have more to a game than slick presentation.'

You've got to have more to a game than slick presentation.