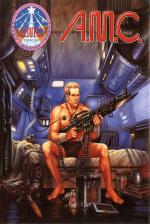 The Deathbringers are coming to town...! Normally, this means the rape, pillage and murder of countless innocent human colonists. Not this time, though, because the settlers have called in the AMC (Astro Marine Corps)!

The Deathbringers are a scabby band of all that's evil in the galaxy; outcasts that have banded together in an attempt to conquer civilisation. The only feasible plan is for a single stormtrooper to seek out and destroy their home base...

You yomp across the Deathbringers' world destroying, as ever, everything in your path as you find the entrance to the enemy base. That's the mission and it means eight sections of horizontally-scrolling destruction. And of course, the AMC give their boys the biggest, baddest guns available - including a gun that can fire flame and three-way shots when the going gets really tough.

The marine is dropped on the planet at the beginning of the battle, while above his head hovers a drone ship to drop those power-ups that are so much fun. Storming in from the right come hordes of insect-men, but they don't last long even in single-shot mode. Winging down from the heavens, just a few bug bodies later, drops a pod. Blast it to reveal the prize awarded by the drone ship for being such a death-crazed lunatic. Care is essential, mind, as the Deathbringers often do the dirty and replace the goody with a nasty surprise, such as a bomb or a man-eating plant!

The running about and blasting continues over hill and under dale as legions of insectoid lifeforms charge your way. And although the guys you fight aren't that hard, the ones that hide in the scenery are. Pretty early into the battle there's a man-eating plant to marvel at - from the inside, first time round! And later there are pit monsters and large blue dragons that attack from off-screen!

AMC's a two-load game, so if you get past the halfway point, you get a password for the rest. The second half gets really sticky, with more vicious beasties of ever-increasing size launching themselves at you. Meantime, you get more meaty weapons - a flamethrower being the bestest - to play with. As the game draws to a close you enter the base and teleport about, blasting a path to that big showdown with king of the deathbringers. Basically a dinosaur in a tin suit, he's a real killer, and likes nothing more than a couple of space marines to chomp!

It's not the concept that makes the game special, it's the techniques. For starters, the parallax scrolling is superb. But it's the monsters that are the real heroes. From the huge Mega beast at the end, to the run-of-the-mill giants that plague the second section, they all move far too fast for their own good - i.e. you have to kill them real quick before they get you!

AMC is full to overflowing with smart things to blast. Yellow jellies pulse along, man-eating shrubs burst up from nowhere and green slimes ooze along ready to leap up and dissolve careless gun-toting loons. With nine hits before you die and five lives, it looks as if Dinamic has finally got the difficulty level right. AMC is easy enough for the beginner to start, while being hard enough to test the best at the finish. Sign up today - the Corps may not pay well but they've a great line in job satisfaction!

As with all Dinamic games, AMC is good-looking, colourful, fast and mega-violent. Great stuff!

Occasional invisibility can be fatal.

Great stuff! Easy enough for the beginner to start, while being hard enough to test the best at the finish. Pretty huge monsters to meet, greet and kill too!