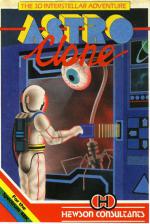 The Seiddabs have returned - yet again - in a game which is a cross between Hewson's Dragontorc and that immortal classic Defender.

The experience of a team of crack pilots, soldiers and technicians has been distilled into a master image from which a series of clones is run off. Each warrior is a clone of its fellows, sharing the same thoughts, the same reactions and the same desire to defeat the Seiddab menace.

In order to defeat the aliens, who intend to take over the whole of the galaxy, the clones must gain control of all the Stargate sectors of space, dock at the Seiddab supply bases and destroy their main launch computers so that the base will be unable to launch new attack craft. The clones must then de-active the Stargates, through which ships are able to travel to other sectors of the galaxy, and trap all the Seiddabs.

The first phase of the game involves strategically placing your ships throughout the star sectors and purging them of aliens. A map of the sectors comes onto the screen and each sector is represented as a rectangle. Move as many of your ships as you require from the home sector - top left on the screen - across the grid.

Each rectangle displays the number of Seiddabs in that area. Some of those sectors also contain Star bases, but you must find them first.

When you have finished your deployment of forces you must choose a sector and do battle with the aliens in a Defender-style game, one of the best we have seen. Not only do you have to destroy the Seiddab battle cruisers but also dodge or destroy waves of asteroids. If a Starbase exists in the sector you must destroy all Seiddabs in the vicinity before docking with it.

After docking, a 3D representation of the interior of you ship - reminiscent of Dragontorc - appears and, when you have made sure that your oxygen level is at maximum, you can teleport to the Seiddab base. Once there you should locate more oxygen.

While exploring the labyrinths and rooms you will find objects. To pick those up, press the fire key and the direction icon at the bottom of the screen will display four options - pick up an object, throw it down, put it in your pocket and activate laser weapon.

All objects have a purpose and some of them can be found in strange places. For instance, if you pick up one of the magnetic devices scattered around the base you can collect items which have dropped down shafts protected by grills.

If that was not enough you must also be wary of roving aliens of various shapes and sizes. The most common look like the Zeroids from Terrahawks. Many of them are created by the strange mechanical eyes which are placed on the walls of the stations. You must destroy those with your laser gun. After the main computers are destroyed in one station, the game continues with assaults on others.

Astro-Clone is a progression from Dragontorc and, naturally, Hewson has been keen to revive the legendary Seiddabs. The 3D graphics are handled well and the icon-driven control panel reacts in a similar way to the spells of Dragontorc.

The 3D graphics are handled well and the icon-driven control panel reacts in a similar way to the spells of Dragontorc.