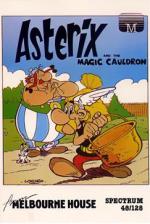 Asterix And The Magic Cauldron

At last a game featuring our own beloved Ed. [What - as a loveable, wiry, little hero called Asterix? - Ed] No, as a big, blundering, blob called Obelix.

Seems like Ed... Obelix, sorry, has kicked the cauldron which houses the first century equivalent of 6X, and if he doesn't Superglue it back together the villagers will very likely kick the can. So it's more roamin' among the Romans as Astie and Obbo go walkabout.

Let's start with the obvious, Asterix And The MC looks good. Big, bright, colourful graphics, just like the cartoon itself. And it's all suitably ancient, if not positively prehistoric.

For starters, there's a long pause as each element of the picture appears. It's rather like watching a haunted copy of that venerable graphics package. Melbourne Draw, at work.

Then there's the question of attributes. Like I said, ancient Gaul is poster-coloured to the point of psychedelia. Asterix and Obelix, on the other hand, haven't been eating their Weetabix. You can see right through them.

But the game's crowning glory has to be its plot. Wander from screen to screen, picking up shards of pottery and biffing boars. The action takes place in a frame within a frame, and adds a Fist element, though it looks like the martial arts weren't so well developed in 50BC. There are lots of neat little sound effect bubbles. But, in the words of the bard, all that FX and fury signifies nowt.

Eventually you may stumble upon the occupying Eye-ties, sip a potion, sock a centurion, spend the night in jail and emerge into the arena... and the forty locations will last forever as they laboriously draw themselves.

Somewhere in here is a potentially good game. If only they could have put all those groovy graphics on a solid framework it might have been worth playing. As it is, it's a classic case of licensing a character then merely producing a load of old Gauls.

Asterix And The Magic Cauldron

A classic case of licensing a character then merely producing a load of old Gauls.