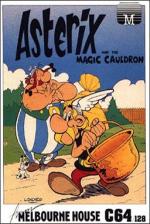 Those with good memories may well remember this game being talked about ages ago. I, a true Asterix fan for ages, have played this game for weeks, hoping that the excitement of Asterix's best friend and he's very strong. His strength is derived from the fact that he fell into Getafix's cauldron at birth, and the super strength potion had a permanent effect.

Obelix is just about to take some of the potion when Getafix grabs the ladel and says: "You can't have any, you don't need it." And reminds him why. Becoming upset, Obelix kicks the cauldron and, to calms of ol' Vital down, and starts a search for the pieces of cauldron, taking Obelix with him.

Having found one piece already, Getafix recovers enough potion for one and gives it to Asterix to take on his quest. So begins the game.

You control Asterix. Obelix follows closely behind. You walk around various screens looking for the pieces.

Walking around will instantly introduce you to one of the annoying features in the game. This is the fact that the screens, although very good graphically, take an enormous amount of time to draw.

Having got over this, I wandered around and found myself in a Roman camp. Camp Compendium to be precise. It was here that I had my very first fight with a Roman guard, which is another feature which should have been developed a bit more.

Fighting consists of Asterix and opponent enlarged in a window at the top of the screen. The opponents face each other, fists at the ready. I say fists, but the Roman will have a large stick which he will quite frequently bash you over the head with. What a nice chap.

Moving the joystick left and right with the fire button held down will cause Asterix to punch in that direction, and you may also jump and duck to avoid an early retirement.

Fighting doesn't usually last for very long, and the most common result is Roman 1 - Asterix 0.

If by some miracle you do win, you gain nothing and just continue with the game. The large window also appears if you fight a wild boar. You need to kill them for food. Although it's usually the boar who gets a bit for his supper.

During my travels I was locked in a dungeon, which I quickly escaped from, only to find myself in the gladiator's ring facing a large - and I mean large - gladiator who was mean and angry.

Thinking things like "Oh, my God" or something to that effect, I quickly drank the potion given to me by Getafix. I became super strong and with three blows I sent the weapon wielding creature back to hell. I presumed it came from there.

On escaping, I found a piece of cauldron, followed by another and another. Things were starting to go right. After many more fights, lengthy walks and hard searches I had discovered five or six pieces of the cauldron.

Just when I was feeling so pleased with myself, a legionnaire kindly rearranged my bodily structure and the game came to an end.

On playing the game several more times, I found I couldn't get as far as before, which seemed quite strange.

Asterix is good graphically, it has great music and a good storyline - the only thing it lacks is playability. Even devoted Asterix fans like me will get pretty bored with the game after only a few goes. What a shame...

Even devoted Asterix fans like me will get pretty bored with the game after only a few goes. What a shame.