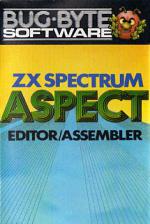 THE RELEASE of the Aspect assembler for the 16K and 48K Spectrum has been delayed several times during the last few months. The result is a finely-tuned and powerful assembler/editor package.

As well as the assembly facility, Aspect has a great deal of flexibility in editing finished programs. It is possible to run backwards and forwards through a program line by line. The editor will also search, or hunt, for specified text strings which are to be used on the screen so that the user can check them before running the program.

Aspect is powerful because a machine code programmer can treat an assembler code program almost as if it were Basic. That is possible because of the use of line numbers to identify separate lines of code, rather like those which are used in Basic listings.

Aspect is an ideal tool for machine code programmers although, because other assemblers have been available for some time, Bug Byte may have lost the lead in this market. The assembler/editor costs £9 and is available from retail outlets such as W H Smith.

An ideal tool for machine code programmers although, because other assemblers have been available for some time, Bug Byte may have lost the lead in this market.