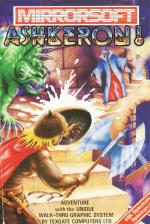 "A new and different adventure, featuring the unique Walk-Thru Graphics System", announced the press release accompanying this new adventure game. Well, it is new, I can't deny that, but it's not particularly different from the average run of the mill adventure.

An evil Wizard has stolen the five treasures which will ensure the well being of the people of Ashkeron, and bless the coming marriage of the Princess Zeraphina. Your task is to take on the role of Stephen the Blacksmith and brave the Wizard's castle in order to return the treasures (although why the Princess' prospective hubby can't go and do it himself remains a mystery).

You'll see from the plot that it's a pretty standard sort of adventure scenario. That wouldn't bother me if the game itself were well done, but Ashkeron, though quite competent, never really caught my imagination. The Walk-Thru graphics simply mean that instead of the location pictures flashing up as you move around, they scroll across the screen in order to give the impression that you are actually 'walking thru' the game. So, if you enter 'Go East' as a command, the picture of the new location scrolls onto the screen from right to left. This doesn't add anything to the gameplay though, and the graphics themselves are small and not very detailed, being drawn mostly with small block graphics rather than pixel lines.

There are a few nice ideas in the game, such as a spell which reverses the meaning of your commands, and t was quite fun figuring out how to say the opposite of what I actually wanted to say (such as 'Ignore book' instead of 'Examine book') but the game overall just didn't hold any attention.

The screen display is very cluttered since it doesn't clear old input and descriptions very often, which makes reading the text a bit of a chore. Another oversight is the frequent lack of 'visible exits' which wastes a lot of time while you type in loads of direction commands to see where your way out is.

Askeron isn't actually a bad game, just very average - if it were a budget game it would be worth a look, but for six quid I can't recommend it.