﻿ Around The World In 80 Days (Pandora) Review | Zzap - Everygamegoing 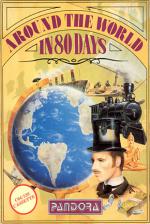 One wet and windy night in London when his intake of port had er... well, gone over the top a bit, Phileas Fogg, made a bet. To the horror of the fellow-members of his Reform Club, he promised to travel round the world in eighty days - *and* wagered £20,000 to back up the bet. Goodbye Reform Club, hello bankruptcy.

Well, maybe not bankruptcy. Luckily for them, Fogg and his sidekick, Passepartout, have you to guide them on their journey. With a capable guy like you at their side, they can bribe, gamble, fight and build human pyramids on their way to success.

Well, guys and gals, I can put my hand on my belly and say absolutely honestly, without the tiniest shadow of a doubt, that this is one game I'll never play again and nobody (except maybe a warmongering rhinoceros with a machine gun) can make me. Why?

Well, it sports one of the most irritatingly long-winded multi-loads of all time - and that's just for starters. The graphics are blotchy - or do I mean blocky? - well, it doesn't matter because they're both - and the gameplay itself is about as rewarding as counting the grains in a bag-full of PG's personal itching powder... If you want to do yourself a favour, give this a miss.

Aaaaaaarrgh! Mnggggggggh! Hiiiiiyaaaaa! [Will you stop doing that, Kati! - Ed] Hmmm, well, that feels a lot better. I've just had a very unpleasant tussle with one of the most annoying multi-loads I have ever come across.

If we hadn't given the Pilchard Of The Month award already, I'd be giving it straight to the guy who decided to waste one whole side of tape on an animated film sequence.

Nice one! If you're still awake by the time the first level loads, congratulations! Don't get too excited though; it's only about six screens long and then you're on to the multi-load - again. If you see this looking innocent on your local dealer's shelf, don't trust it - not one inch.

Hookability 23%
Watching the multi-load murmur to itself plus you to sleep before you even start.

Lastability 18%
Might last longer than a cup of coffee - but not much.

Overall 29%
Tedious, long-winded and ultimately boring. Recommend to people you don't like.

Tedious, long-winded and ultimately boring. Recommend to people you don't like.