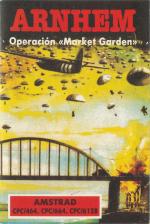 Arnhem simulates the "Market Garden" operation in 1944 when the British planned to smash the German occupation of Holland.

This is an attractively presented, well packaged game. It comes in an A5 video wallet with an extremely well-presented booklet containing some useful historical background.

The screen layout is slightly altered from the Spectrum version of the game and I found the presentation of the on-screen information slightly less easy to take in at a glance as a result.

The game itself is very good and there is little that could have been built in that would really have enhanced it. The map and unit graphics are of a high standard and even the sound effects aren't too bad.

There are five game options, covering different sections of the Arnhem Operation. (Option five covering the whole lot) and the player can choose from one, two or three player options.

I feel that the German tactics in the one-player game are a little stilted, slightly unimaginative and a bit predictable. I also feel that the stacking of the units and the graphic representation of their movements are somewhat cumbersome.

I am, however, nit picking. Previous reviews of the Spectrum version of this game have certainly sung its praises and, in my view, quite rightly so.

The game is user-friendly, and the mechanisms are easy to follow. Certain aspects of the phasing of movement are reminiscent of Confrontation.

The game is user-friendly, and the mechanisms are easy to follow. Certain aspects of the phasing of movement are reminiscent of Confrontation.