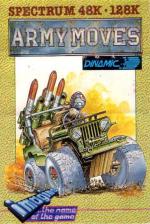 Hi there! I'm a rootin' tootin' soldier and I like killing things and eating nails. I'm a member of the Specialist Operations Corps - a crack regiment of nutters, er, I mean commandos, picked for dangerous missions. Today's a real doozy - across broken bridges, jungles, deserts, learn to cope with lots of different modes of transport, enter the enemy HQ, open a safe and get some information. And all before breakfast!

Ahem! Army Moves is a darn hard game. How's this for just the first screen - drive over a bridge, jump the pot holes, fire at the helicopters, fire at the jeeps, and all while firing at an enemy squadron! Not a piece de gateau, I can tell you.

My only gripe with this game is that it's too easy to die! If you don't get bombed by helicopters, fall into holes and hit any jeeps in the first ten seconds, the only thing you can be sure of is that you're bound to do it in the next ten. And while you're keeping an eye out for all these hazards, you've also got to time leaps, dodge bullets and fire back!

It's nothing more than a cross between Green Beret and Moon Buggy, and I reckon it's highly entertaining. For those who enjoy a good shoot 'em up, I'd recommend nothing better. It's a multiloader, so each level is complicated, and lots has been crammed in in the way of action. The graphics are nifty too, being large and well animated, and very detailed - and the multiload means there's lots of 'em.

With this and Arkanoid, Imagine looks to be heading back to its former glory, especially if it keeps up this association with Dinamic Software - the Spanish group that programmed the game. I doubt this'll be the last we hear of the Spanish connection.

If you want a bit of gratuitous violence before tea, buy it, 'cos it's the sort of game that'll keep you amused for hours. Me? I'm for another go. Haha! Eat lead Commie...

If you want a bit of gratuitous violence before tea, buy it, 'cos it's the sort of game that'll keep you amused for hours.