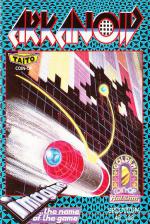 Vaus ist los? A spacecraft lost in the perilous backwaters of space and time? Cast into outer darkness, though it seems reasonably well lit to me? Ah, but you know what Arkanoid's all about - it's that viciously addictive update of the mother and father of computer games, Breakout - all battering balls against bricks, but with knobs on. It wowed 'em in the arcades, and now all 33 screens of nut-crunching action have been converted to the Speccy. Imagine has done a fine job, and the result is one of the best games you'll see on the Spectrum this year.

Yes, I know we've said it before, but it really is that good. Each screen has a different pattern of bricks to knock off, and they're all extremely tricky - at least I think so, since I haven't got beyond level 9 yet. Most bricks need just a single hit, but silver ones must be pinged twice (and on later screens, anything up to five times) and gold ones are indestructible.

You also get little power capsules which drop down the screen occasionally when you hit certain bricks. If you can manoeuvre yourself to collide with one of these before you go back to meet the approaching ball, all sorts of weird and wonderful things can happen.

Fortunately the capsules are lettered, so the eagle-eyed will get an idea of what's about to befall them. Best in the early stages is the 'E' capsule, which extends the length of your bat (or Vaus craft) so you can be sure to get it in the right place. The 'S' capsule slows down play, though not for as long as you might hope. Still, it's a useful ploy on later screens when things start getting a little hectic. 'P' gives you an extra life, while 'L' arms you with a laser that'll destroy both the bricks and the tiresome nasties that drop down from the top of the screen and obstruct all your careful planning. 'C' allows you to pick up the ball when you intercept it and then move position before firing it off again. 'D' is an odd one - it multiplies the ball by three, making it three times as effective, if three times as difficult to play. It comes into its own, though, when your ball is stuck behind or within a wall. Then watch the bricks go!

But the best capsule of all is the 'B' one. Pick this one up and a short cut through to the level appears on your next right.

All these capsules last only until you bump into another one, or until you die - a good incentive not to let your lives ebb away too swiftly! One dead easy way of losing a life is to assume that if you hit the ball on the very edge of your bat. It'll make contact. Wrong! You're only really safe in the centre, and if you're trying for a really whizzy angle to get at some awkward bricks, you've got to be a bit nifty about it.

Anyway, enough of all that - I'm going back to play Arkanoid again. My excuse - further "research". My reason - well, how many ways are there of saying addictive, 'cos this is that and more.

How many ways are there of saying addictive, 'cos this is that and more...!