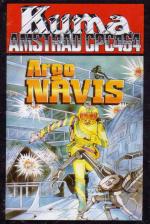 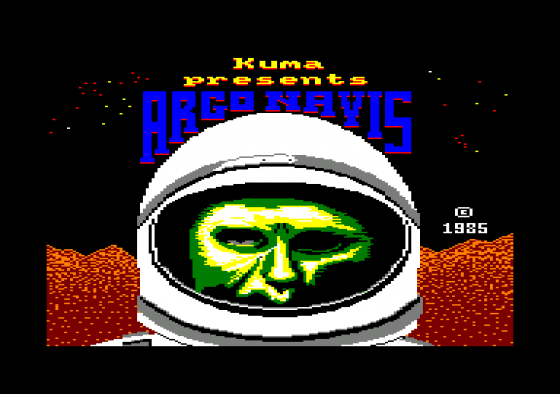 Wandering the alien-ridden depths of a spaceship, you have to find the twelve destruct codes and control rooms that will enable you to destroy the ship. Having set the ship to explode, you've also got to get out again.

The ship is twelve levels deep and eight wide making a total of 96 screens. Each one of these is composed of a variety of platforms, stairways, doors and alien hazards. The space-suited character under your control has to walk and jump his way around the screens trying to maintain his oxygen level and not fall prey to the alien monsters.

The destruct codes are in the form of blue discs which you have to jump to collect. There are also stars and oxygen cannisters which can be picked up for points and oxygen respectively. The supply of air is needed to replenish that lost when encountering aliens or falling from platforms.

There are lots of dangers to the suit you wear and each one will deplete the oxygen supply until you run out and lose your only life. Robot guards will shoot bullets at you but you can return their fire. Spidery creatures, though, have to be jumped over. "Spitters" are another problem; they spit out bullets but they can do it at several angles and are often lined up in banks which are hard to get past without injury.

Many of the platforms have doors across them which block your path. Some of these will slide of the way using the control buttons that you have to jump into - but this may block another path! Both movable and immovable doors cause damage if bumped into. The spaceman also has to watch out for long drops since every time he falls he loses oxygen. Sometimes walking off the edge of a platform can be used as a short-cut but it shouldn't be necessary.

One interesting aspect of the game is the firing ports which, if walked into, take you to a new screen outside the ship where you have to blast an alien ship. The screen scrolls smoothly in all directions while the ship moves into and out of the foreground view. To shoot the ship, it has to be centred on the screen and blasted with a phaser. This returns the view to the inside of the ship where you can now pass the firing port.

If you get all the crystals, they have to be set to explode in control cabins and then the spaceman has to get out fast. The graphics are fairly simple as are the sound effects but the shoot-'em-up sequences are very smooth-moving.

This game had its moments, but I found them few and far between. It reminded me of Gremlin's Project Future, reviewed in our last issue - except it's not as good. The best bits, in fact, were the shoot-'em-up sequences, where the scrolling out-smoothed anything I've previously seen on the Amstrad.

N. Graphics and sound effects are simple.
N. Gameplay is mostly just running around.
N. Keys only control can get confusing.

The best bits were the shoot-'em-up sequences, where the scrolling out-smoothed anything I've previously seen on the Amstrad. 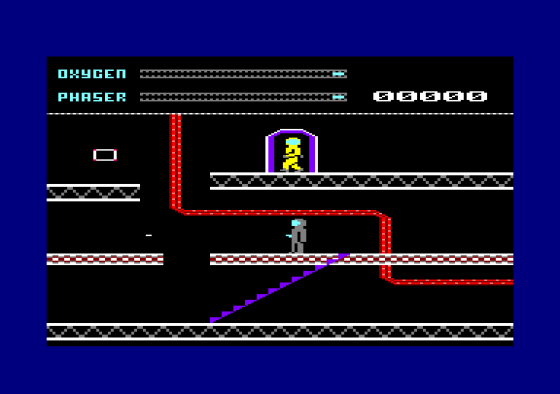