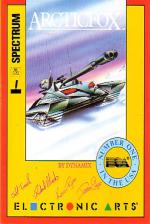 How long is it going to be before people realise that it just isn't a very good idea to try and convert a game that was out about a year ago on the Amiga (and wasn't actually a technical marvel then) on to the Spectrum? Well, obviously never, because they're still doing it and there's no sign of them letting up.

Articfox is the first game to emerge from the Electronic Arts stable since PHM Pegasus - which was rather disappointing - and it's about as exciting as a cheesey Wotsit that's been dropped in a puddle.

The plot is one of those absurd ramblings that you could make up in fifteen minutes. Alien invaders have landed in the Arctic circle and are setting up an atmosphere processor which will make the Earth's atmosphere acceptable for their horribly sweaty, flappy alien lungs, thus rendering it unspeakably toxic as far as humans are concerned. And, as per, it's up to you to stop 'em.

So there you are, in your tank, driving around and shooting things. The tiny game-screen is filled with black wire-frame graphics on a cyan (that's blue for non-publishing types) background which move really quite slowly and look quite dreadful. Had they been blue on white, green on black or anything else they should have looked OK, but as they are they make the lines look even blockier than they really are.

Although there are degrees of strategy; the laying of mines to trap enemy tanks etc, the game really ends up being nothing more than a glorified Battlezone on ice.

There are numerous tweaks and touches that do manage to elevate Articfox above a simple arcade game - you've got to watch out for snow drifts which will screw up your speed, as well as keeping an eye on the radar scanner and the game screen. There are a number of opponents to combat, all looking like they've been made out of coat-hangers and not really moving very quickly.

And that's where the game really falls down. The speed is just not good enough. The only time when there's a half-way decent spell of graphics is when there is a single, basic object on the screen; only then does the game move itself around in a half-way respectable speed.

On the plus side though, there is a definite aim to your misson, and a real feeling of menace as the little black dots on the radar screen slowly gather around you. You can chase things around and use guided missiles to pursue the bad guys too. You do end up feeling that you're playing one of those Realtime games from years and years ago though. And one with a slow-motion device attached to the machine to boot.

Don't get me wrong, I'm sure strategy buffs will find lots to keep them amused, and I've got nothing against wire-frame graphics - I thought Battlezone was one of the most incredible games ever, but Arctic Fox just failed to grab me there isn't enough of anything that you haven't seen done better before. (What does this mean exactly? - GT).

Quite disappointing conversion. Fails to hold the interest.

Quite a disappointing conversion. It fails to hold the interest.