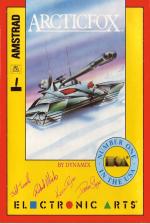 The south pole (shouldn't it be "Antarcticfox"?) has just acquired some new residents, an alien invasion fleet. Oxygen doesn't do them much good and so they decide to convert the Earth's atmosphere to something more hospitable. Unfortunately for the human race, however, alien air is very toxic and some brave soul must go to the Antarctic to destroy the atmosphere converters, together with the aliens. Guess who gets the job?

You command the Arcticfox tank, specifically designed for combat in the frozen wastes. In the upper screen is a 3D vector graphics view of the outside world and around that your instruments. A radar screen sits at the bottom of the display providing information on your surroundings. A compass to the right shows your heading and a digital readout below gives your geographical position. To the left of the external view are three panels indicating the number of mines, missiles and your speed. A clock shows the time, commencing at 0900. Above the view screen is an indicator bar that is green, orange or red.

Before play begins, you have the choice of practice or tournament play. The former gets you used to the tank and its abilities, and the latter is the full scale game of alien annihilation. Practice is vital before you're ready to save the world.

Antarctica consists of several different terrain types that alter the movement characteristics of the Arcticfox. Crevices are most dangerous: drive over the edge and you plummet to your death. Tundra slows you down and mudflats cause you to slide a little. Rocks and mountains can't be driven over, but they offer some cover from enemy fire (and cover for the enemy too). Ridges present a higher vantage point from which to blast your enemies.

Your tank is armed with missiles, cannon and mines. Missiles are camera guided, allowing you control after launch. Mines are deposited from the back of your tank and detonate after a time limit - or when something bumps into them (yourself included!). Missiles are more destructive than cannon, but unfortunately they're in short supply and must be used carefully. You have three other options: cannon inclination, dig in and relative reverse. The first speaks for itself; the second enables you to be part-buried beneath the snow, while relative reverse speedily switches you from forward motion to reverse and vice versa.

The alien forces consist of tanks, reconnaissance vehicles, aircraft, rocket launchers, radar stations, air converters, communications forts and the main fort. There are two varieties of tanks, light and heavy, the lighter ones being lower on firepower and armour. Reconnaissance vehicles either patrol with aircraft or light tanks depending on whether or not they can fly. Rocket launchers are armed with very destructive missiles and need to be approached cautiously. Radar stations jam your radar, detect you at long range and guide alien forces towards you.

Communications forts draw in the heavy opposition towards you, and that's where the indicator bar at the top of the screen comes in, keeping you aware of how well informed the enemy are of your position. If it's green, for instance, your position is unknown to them, while red means aliens know where you are. Finally there's the main fort that must be demolished if you're to win the game. Everything can be destroyed with either the cannon or missiles, though some targets take several hits.

The vectors are well drawn and there's no flicker in them, but considering the comparatively small playing area it should have been possible to make the action a little faster. Colour is used well to indicate different terrain types and the rest of the display is clear and easy to read. Sound is limited to explosions, but they're done well.

One thing and one thing only prevents Arcticfox from being a fantastic game and that's a lack of action. For the first few minutes there is plenty of opportunity to blast aliens and destroy air converters, but from then on it's mostly a matter of driving around looking for something to destroy, so that you end up driving over ridges for excitement.

Even so it's a very good game that should keep you occupied for many months before you finally thwart the invaders.

Lots of features here. Blizzards force you into mistakes and the hills and obstacles are good too. This is not a simple blasting game, but requires some thought. Pity about the naff screen presentation - more effort here would have only helped. Novel, not fascinating.

Staying Power 79%
N. Destroying the enemy base takes a long time.
N. Driving around with nothing to do gets boring.

A very good game that should keep you occupied for many months... Pity about the naff screen presentation - more effort here would have only helped.