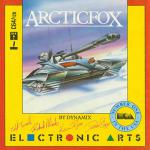 A lone tank battles in the frozen wastes of Antarctica. Eric Doyle takes control of the situation.

The number of vector graphic games seems to be increasing rapidly as the months go by. Until now Novagen's Mercenary gave me the greatest sense of 'being there' but Ariolasoft's ArcticFox is a worthy challenger.

The year of ArcticFox is 2005 and an alien force from the planet STV-7X has taken over the Antarctic regions of Earth. In their frozen seclusion, they are busily at work converting the atmosphere to a more acceptable one of ammonia, methane and chlorine. This just will not do and the only weapon capable of defeating the invasion is Slye-Hicks MX-100, codename: ArcticFox.

The enemy have protected themselves behind a force field but the belief is that this can be destabilised by destroying their main fortress. To do this means venturing across the frozen wastes battling against untold odds. Well almost untold, there is a database which details all of the enemy craft and a more formidable line-up I've yet to see.

Basically there are six mobile units which will harry you to your doom. These are usually found in task forces but there are recognnaisance vehicles which use stealth rather than firepower to indicate your location to their forces. The unarmed vehicles creep up along the ground and in the air. The Recon Flyer is much more difficult.

Usually the Flyer is accompanied by fighter planes which are the deadliest of the enemy's armament. If the flyer gets close enough it will attach a transmitter to the 'Fox and this beacon will allow task forces to home-in on you. Although the plane is otherwise unarmed, its accompanying fights spit deadly missiles in your direction.

It is possible to blast them all from the skies with a few well-aimed shells, but elevating the gun often leaves you motionless and a sitting target for any sharpshooter in the area. By far the best way of dealing with the airborne foe is to blast a missile or two in their general direction. Once fired the missile can be directed by the joystick according to flight control conventions. This means that pulling back on the joystick will make the missile rise, pushing forward makes it plummet earthwards.

On the ground there are squadrons of tanks which may be dangerous light, manoeuvrable vehicles or heavily armoured sluggish ones in areas of greater importance. The Light Tanks are probably the most dangerous because of their swift movements. They can fire several shells in the time it takes a Heavy Tank to fire just one of its blockbusters.

The final mobile massacre machine is the floating mine. These wil home-in on any tank in their vicinity and blast it to smithereens. Fast action is required to eliminate their threat.

Immobile but potentially more dangerous than any of these weapons are the rocket launchers littered about the high ground vantage points. These units have a firing zone which spreads in an arc of 140 degrees. Obviously the best way to deal with them is to approach from the rear and stick a shell up their backs.

Buildings such as cloaking radar stations, communications forts and the target of the mission, the main fort, may be encountered. Apart from the ring of steel around them they are otherwise unprotected and easy meat for the battle-hardened Commander of a 'Fox. Eliminating these units renders the enemy vulnerable to attack and gives you an advantage in battle whch could be decisive.

The final enemy installations which will be encountered are the numerous air converters which are busy converting the atmosphere to the poisonous mixture I told you about earlier. As they are reduced in number, so the rate at which your percentage oxygen count reduces. For a longer game, these targets must be eliminated as quickly as possible.

Vector graphics allow you to view any object in a holographic way. As you approach an object, it grows in size but, more than this, the aspect changes as you move around or over the object. This facility allows you to climb smaller hills to gain a heightened vantage point. So realistic is this effect that, as you climb, you can occasionally pop off a shell or two at passing aircraft. This is because of the increased elevation of your gun as you climb upwards.

The ice world is crazed with deep crevasses which must be avoided at all costs. Even though you can pic them out visually it is better to use your compass and radar to determine the most advantageous pathway. The enemy are no fools and often pposition their main installations on the lip of a crevass which is ready to swallow up any incautious attacker.

The display panel lacks the animated hand which featured on the original Amiga game but is nonetheless an impressive piece of graphics. Apart from the normal forward-facing vector display, you can switch the radar out and a rear view display in. To have two juxtaposed vector displays on the screen at once is a brilliant piece of programming which puts all other similar games in the shade.

All the information you need for your assault is here. A control panel allows you to select the 'Fox's mode. Change elevation, select rear view, drop land mines, fire missiles and reverse controls. The final option allows you to go to earth like a real fox by digging down into the snow.

The play options allow you to view the enemy craft or to enter one of the three levels of play. The first level is a practice mode which may be followed by the beginner's game. Suicidal maniacs can also try the tournament level but, be warned, this is Hell on Earth if you're not a seasoned campaigner.

The enemy force field forms an impenetrable barrier around the 'Fox, a handy way for the programmers to define the battlefield. Within this ring is a range of terrains spanning snowy wastes and lush green tundra regions. On snow the tank can reach its top speed of 144 kilometres per hour but on tundra this reduces considerably.

Often the game opens with a face-off between two tanks. The best mode of attack is to move in to close quarters by initially reversing the turning in either direction to avoid the inevitable shell hurled in your direction. Then, keeping the enemy on the edge of your screen, advance until you can allow the tank to slip off the edge of the screen, quickly turn and fire. With a bit of practice you can easily outmanouevre your opponent and slip off a shot before it knows what hit it.

ArcticFox is a state-of-the-art game which uses all of the tricks learned on the Amiga to improve the standard for the C64. It was just a few years ago that Battlezone was the slickest game in the arcades, ArcticFox surpasses this as it supercedes all but the depth of play of Mercenary. The future is here and its name is ArcticFox.

The future is here and its name is ArcticFox.