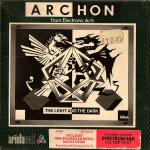 Archon is a strategy game requiring quite a high degree of arcade skill. The main playing area looks remarkably like a chess board until you notice that while some of the squares are either black or white others are in tones of grey, and changing. As with chess you have two opposing forces facing each other but unlike chess the forces are not matched. Each of the two armies have different pieces, each having individual strengths and weaknesses.

Before the game begins you must decide between playing for the good guys or for the powers of evil naturally a sportsman would select the former. The game can be played either against the computer or against another player but in any event to be successful you must learn to appreciate the individual powers of each of your pieces. Each side has different characters, or icons, but overall they are matched. As with chess some icons are able to move ahead only two or three squares while others may be able pass over other icons or even, with the aid of a spell, teleport to any location on the board.

To move you simply manipulate a cursor square over a piece, press fire, then move the square to the position you desire. If the move is over a distance greater than is allowed, or is illegal for some reason, perhaps because it is blocked by other pieces or has been imprisoned by your enemy, then the computer will tell you. When playing the computer it moves its pieces in exactly the same way, so it's easy to follow its moves.

The object of the game is to take and hold the five 'power' points but to do that you must destroy the enemy forces and this takes a great deal of shrewd planning. Apart from having to know the strengths and weaknesses of each of the pieces and remembering how best to use them, it 's good to take advantage of situations unique to this game. For example perhaps you have just lost a major piece and in doing so have severely wounded the opposing icon, are you in a position to send in a minor icon and finish the job before the enemy has a chance to heal its wounds? When you are ready to attack all that is required is to move your icon over to the occupied square then the computer will ask if you want to challenge the occupant. A positive response causes the main display to change for the battle screen.

The battle screen has a life strength indicator for each of the icons in combat, a first time player may be horrified to notice the life bar of his opponent's icon is three times greater than his own. At the start of battle the two icons are positioned on opposite sides. At various and constantly changing locations around the screen blocks are located, these act as barriers for either side to cower behind. The two icons must fight it out to the death and the winner will, of course, win the square for which they are fighting. Depending on the nature of the icons involved, the mode of attack will vary, for some are able to fire bolts and can cause damage at a distance while others must make contact to strike a blow. The meat of the game, however, is making sure that your icon is able to defeat the enemy and this is where strategy comes in. Try not to take on an opponent that has greater strength. While some icons are able to move at great speed they may only be able to fire at close range, others move very slowly but a direct hit from one of these could kill you. Other icons may possess speed and strength but require long intervals before they can fire again. The minor icons enter the battlefield with very little strength, but with luck and nifty play perhaps you may inflict a lethal blow.

To make the strategic element of the game even more complicated the program introduces concepts such as 'luminosity cycles' and 'power points'. If you decide to attack an icon on a power point then that icon will be much stronger than normal as well as being protected from the effects of magic. The luminosity cycle dictates that while icons on squares of their own colour are stronger (dark on black etc) some of the squares will change in colour. The effects of the magic applied by the magicians make for greater complexity, the spells can only be used once and their use weakens the icon. The revive spell allows you to bring back from the dead a useful icon while the summon spell allows you call an icon that did not previously exist. While these Icons will only last for one battle, they are very powerful and will almost always win. Other spells include teleport, heal, exchange and imprison. Since the use of a spell at the appropriate time can make significant changes to your progress, you must make very sure that your magician is protected while at all times trying to find ways of destroying the enemies.

Archon looks similar to chess but don't turn the page yet, in play this is nothing like chess. All can really say is that this is simply the most addictive strategy game I have ever played! It will appeal to strategy and arcade players alike, in fact it is essential that you possess the talents of both. My only complaint is the price at almost &#163;11 I think it's a little bit steep.

Archon has revitalised my interest in board games, at the best of times I had little or no talent for playing chess but lam trying very hard to master this because it is so much more fun. l love all the subtleties the game offers, not only the effect of the luminosity cycle but also how different pieces behave on the battle screen. Have you ever known a time in chess when a Pawn takes a Queen and they both lose? Well it happens hem, because the piece 1 attacked had been so weakened by earlier attacks my icon just managed to administer the death blow before catching a fireball that was already in flight I most strongly recommend those of you who enjoy strategy games to buy this - Archon really is a game that you will keep coming back to play. Complaints? Well only two, the graphics could have been better and for that matter so could the sound. The second complaint relates to the movement of icons, once a piece has been selected it must be moved - not even chess is quite that strict, but then chess was never this good.

l love all the subtleties the game offers, not only the effect of the luminosity cycle but also how different pieces behave on the battle screen.