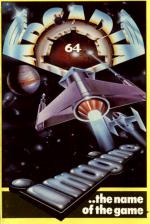 You'd think that converting a smash hit game onto a bigger more powerful machine would prove a cinch.

In practice it's apparently quite the opposite. Spectrum Arcadia is one of Imagine's best games whereas Arcadia for the Commodore 64 is little more than a second rate imitation.

The game follows the theme of the Spectrum version but lacks any of the "elusive playability" of the original.

The game is set in a galactic war. You're the sole surviving rebel facing the Federation's huge war machine. You control Arcadia, the galaxy's most powerful space craft. Wave after wave of the Empire's forces attack Arcadia, each new onslaught bringing fiercer and more intelligent opponents.

The first attack wave consists of rockets flying overhead, which are fairly innocuous apart from dropping the odd bullet.

Progressive levels become more difficult if only because of the sheer numbers of aliens present. Each sheet sees the appearance of a new and exotic alien race, intent on destroying Arcadia for the greater glory of the Empire.

Arcadia 64 is a very average game typical of games produced a year ago but not up to the standard demanded by today's computer owner.

If the program has one redeeming feature it's the keyboard control. The player can choose between a wide range of key layouts, one of which is bound to suit them.

Arcadia is for the Commodore 64, one or two players and has a joystick option.

The game is in the shops now or mail order from Imagine Software costing £5.50.

Spectrum Arcadia is one of Imagine's best games whereas the Commodore 64 version is little more than a second rate imitation.