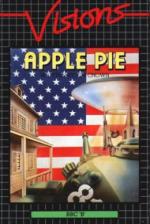 The setting for this colourful Mode 2 arcade game by Visions is a small mid-western American town, in reality a grid of coloured squares through which a variety of aliens swarm, attempting the rather improbably task of stealing the stars from the town's flag.

Your job is to control a blue Battle tank driving round the grid shooting the aliens before your supply of stars runs out. The flag itself is at the bottom, and each alien touching it removes one star. Remaining stars at the end of each wave give a bonus, and there is an additional bonus for shooting the five lettered droids in the correct sequence. Other nasties include Homers, which follow you round, Scythes and Packers, Tanks which shoot back and Ziggies which can only be shot broadside on.

Control of the tank is keyboard only, but the controls are fairly smooth and responsive. The graphics are faultless and fast, but the tank's manouvreability is limited and a reverse button would be useful. Nevertheless, Apple Pie is a fairly original and playable game, and I recommend it unreservedly.

Other BBC Model B Game Reviews By D.A.

Apple Pie is a fairly original and playable game, and I recommend it unreservedly.