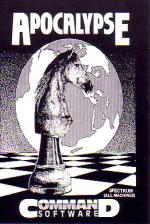 Apocalypse seems to have a worthy pedigree - according to the instruction manual, it first appeared in 1983 on the Red Shift label. It's quite difficult for me to give a fair judgement of this one, because it's a two-player game only.

The full title is Apocalypse: The Game Of Nuclear Devastation, but the concept is more abstract than the specific settings suggest. The main program is a framework for four maps on different scales: Europe, the Caribbean, Britain and London. There are four scenarios of this kind, and the rulebook promises an expansion set with 'star systems' and 'Nether Earth'.

But there's little variety in the gameplay. On the European map you can move across entire countries and capture capital cities, the British map scales things down and lets you fight for the privilege of owning Liverpool, and the London map gives you the chance to take over Wimbledon and Games Workshop!

Essentially, the players form from two to four empires, which can be given their own names; each empire then attempts to bring the whole map under its control, whether that's all of Europe or just London. The empire centres - cities and important districts - are distributed equally among the empires at the start of the game. The player can choose his own, or let the computer allocate them randomly.

Each location has a revenue value, and the total revenue value of each empire's territory represents how much the player can spend on divisions, warships and nukes each turn.

The turn system is quite complex. The game gets underway with a deployment phase, where the players buy forces and position them around their empires. The phase which follows allows four subtly different methods of movement; irritatingly, forces can go only one square at a time and nuclear missiles, once deployed, can't be moved at all.

Units are not represented in the traditional pictorial fashion. Instead, the empire which controls each location square leaves its own symbol in the square, and the forces deployed there are indicated in a business-like way by numbers. This does nothing for atmosphere, but it stops the map getting cluttered.

There are really two maps - an overview to move the cursor about, and a scrolling close-up in a small window where you can examine each location. This works well, though it looks dated.

Combat occurs when one empire tries to occupy another's territory in the movement phase. This is only allowed if the attacker mobilises enough divisions, so kamikaze attacks aren't possible! There are different types of attack, and it seems the success of an attack depends largely on how much defence the opponent offers.

The genocidal player can choose not to bother with this sort of thing and launch a nuke instead. Predictably, this causes widespread devastation, indiscriminately destroys forces in the locations surrounding the target, and permanently reduces the revenue value of the affected area.

The instructions warn against nuking, but the advice isn't so sharply brought to life in Apocalypse as in, for instance, Theatre Europe. There's no instant overretaliation from the computer, merely the possibility of annoying your human opponent.

Apocalypse is an odd blend of realism and fantasy. For a start, you're required to choose your millennium. You pluck a date out of thin air - and of course it bears no resemblance to real history and makes no difference to the game.

If you let the computer select empire centres for you, the result is an impossible intermingling of power bases which, despite the realistic maps, makes the game look abstract from the start. Apocalypse lacks atmosphere because of this conspicuous 'gamishness'.

But Apocalypse has some meat. Though the scenarios are really only different maps, they add the imaginative scope which many games lack. And the very fact that Apocalypse has been designed or expansion is impressive, though the necessity of having at least two players limits its appeal. It looks slightly old-fashioned, but it's well enough programmed (Don't press BREAK, though!)

There's no point giving ratings to a computer game which doesn't function like other computer games but I'd recommend Apocalypse as a good buy for those who are certain they'll have someone else to play it with.

It looks slightly old-fashioned, but it's well enough programmed. A good buy for those who are certain they'll have someone else to play it with.