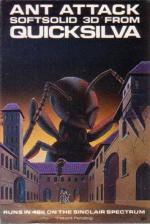 The most impressive thing about Ant Attack is the scrolling 3D depiction of the city in which all the action takes place.

For example, if you move your man behind a building, he disappears from view, and to see what's going on you have to select a different scanner. You have a total of four scanners, all of which depict the same part of the city, but from different angles.

It's not advisable to leave your man out of sight, because the city is inhabited by vicious ants who love nothing better than munching flesh.

Your mission is to rescue a number of trapped damsels in distress, although to protect themselves from the accusation of sexual typecasting, Quicksilva offer you the option of rescuing boys instead.

You find the trapped persons by using a direction indicator, which turns green when you're moving in the right direction, and red when you're not.

To avoid being devoured, you must either stay above ground level where the ants can't reach you, or use grenades to destroy them.

Trouble is, to throw a grenade you must choose from four different buttons, one each for four different distances. If you add to these four buttons the four direction control buttons, and the four scan buttons, you need the skills of a touch-typist just to stay alive.

Another thing that greatly annoyed me was the tunes that are played whenever you find a damsel, or are bitten to death. They really are tedious.

Still, if you're prepared to put in the work necessary to master the controls, Ant Attack offers you an original and challenging entertainment.

If you're prepared to put in the work necessary to master the controls, Ant Attack offers you an original and challenging entertainment.