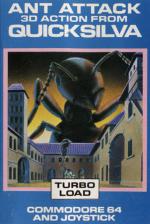 This popular 3D maze game has been converted for the C64 from the original Spectrum version, and seems to have benefitted from the change.

For those hermits who don't know the game, the idea is to steer a boy or girl - your choice - through the 3D city of Antescer, a strangely abstract place of geometric solids, to rescue a member of the opposite sex trapped somewhere within. To hinder your attempts the city is crawling with deadly ants which chase and bite you. Twenty bites signals your being "eaten alive". You do however have a supply of bombs which are effective against the insects.

The graphics on this version are exceptional, with the facility to view the scene from four different angles. The city is drawn with crystal clarity, and the game itself is fast and challenging.

It requires some practice to get the best out of Ant Attack, but it is well worth it. My only criticism is that the sound is virtually non-existent, a probably carry-over from its Spectrum counterpart, and that the instructions are a bit limited.

It requires some practice to get the best out of it, but it is well worth it.