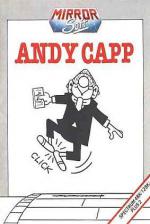 I wasn't much convinced of the idea of an Andy Capp computer game.

I always associated the cartoon with old men in pubs. It doesn't have quite the same grab factor as, say, Top Gun.

I expected tedium and, well, at least it's not quite like that.

The first point is the game looks exactly like the cartoon strip. Big characters, smoothly animated, and the backdrops are authentic-looking, all grim streets and dingy pubs. It even retains another important visual aspect of the strips - yep it's in black and white, otherwise we'd be in attribute clash city an' no mistake.

The cartoon is pretty sexist and so is the game but then I guess the character of Andy himself is pretty sexist too. The plot revolves around getting your dole cheque and giving it to your loyal wife Flo'. This seemingly simple objective actually turns out to be astoundingly complicated. For a start, one of your first objectives is to actually make some money - this apparent contradiction is because you'll need, as Andy Capp, to keep your energy levels up by drinking beer. One of your first objectives therefore, is to find a pub. That's when you're going to need some money, unless, of course, you fancy a bit of thieving ...

Thieving - ie not paying for anything in a shop or pub or taking an object you want for someone who wants something in return - is going to cause you to be arrested by PC Plod. Get arrested and you'll need yet more cash to pay your way out of jail.

The Andy character spends much of his time drinking, second only to drinking as a pastime is fighting. It's worth fighting people just for the sheer joy of seeing the authentic whirl-of-arms-and-legs-in-cloud-of-smoke fighting animation. Spiffing.

There's a nifty icon-select system that runs along the bottom of the screen. Standard options: Use object, Inventory, Examine, Speak, it's always worth trying Examine in the most unlikely places - the papershop, for example, yields unexpected rewards.

Graphics are excellent, although the basic simplicity of the cartoon doesn't require a lot of detail. Still Mirrorsoft deserves credit for making the graphics so large, accurate and smooth.

If there is a problem with the game, aside from any doubts about the very basis for the licence, is that the gameplay is a touch slow. I was beginning to lose interest in the thing after about an hour. Still, that could be my prejudice and if you like the cartoon strip you may be more impressed.

Looks very good, technically clever but I don't think the gameplay is going to retain your long term interest .

Looks very good, technically clever but I don't think the gameplay is going to retain your long term interest.