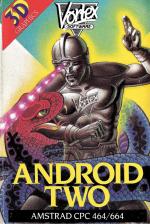 A game that commands you to 'rationalise the paradox zone' can't be all bad. Android 2 is nearly all good - fast, colourful, addictive and fearsome. As the android in question, it's your perilous duty to rid three areas of the repulsive Millitoids. It's a nasty job, but someone's got to do it - and it might as well be you.

You begin in the 'maze of death', where you land in your transporter capsule from who knows where. The maze is a puzzling complex of hedges, viewed in 3D. There are five Millitoids per zone, but the playing area is so large that they're not easy to find. What you do encounter, immediately on leaving the capsule, are the other evil creatures inhabiting the maze.

To begin with, there are hordes of Bouncers. These are the Millitoids' minions; grotesque red figures with wobbling antennae and whirling arms. As the name suggests, they bounce. They are indestructible and move in rigidly ordained patterns. Unfortunately they are also very numerous - avoiding action is not always easy to take. Contact is fatal.

Mutants are fewer and, happily, can be killed with one blast from your trusty laser. They're not easy to hit since they corkscrew unpredictably around the maze. Again, contact is fatal.

As if Bouncers and Mutants weren't enough, there is the additional hazard of land mines exploding underfoot. They can be easily spotted, but are too many to be easily sidestepped. A mine, though, will not kill you outright, but merely sap your energy.

And so we come to the Millitoids, the reason for your presence. A Millitoid is a large, pulsating beast which slithers all over the place. It's rather like an overgrown caterpillar but much more dangerous. There's only one way to waste a Millitoid, and that's by shooting it in the head five times. First, though, you've got to find one and then stay out of trouble long enough to administer the necessary dose. If you succeed in exterminating five, you have to make it back to your capsule before your time limit runs out.

This gives you access to the Paradox Zone, so called because each area looks the same and contains a capsule. But which is the right one? I'm sure I don't know. Once more there are the Bouncers and Mutants. Once more there are five Millitoids to be done in before you can go off and try to find the right capsule.

Android Two has only three zones of action, but there's more than enough going on in them to satisfy hardened gamesters. The 3D view is very smartly achieved, but the scrolling could lose you lives - the screen moves when you get to the edge. And there may just be a Millitoid waiting for you on the other side!

Enjoyable pressure play in which you can't afford to take a breather. The graphics are great - with good use of colours and 3D. Can be frustrating if you get yourself trapped in a corner, but the difficulty level seems to be about right. Gimme another android to wreck.

The graphics are great - with good use of colours and 3D. Can be frustrating if you get yourself trapped in a corner, but the difficulty level seems to be about right.