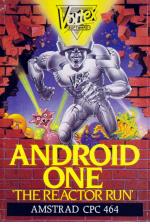 A high-speed, action packed arcade game that requires instantaneous response to the many alien attacks encountered.

These aliens are of four types; Groupies, Skaters, Bouncers and Wanderers. Each attack in their own style and need to be avoided throughout the game.

Objectively you have to overcome the defence mechanisms of the reactor complex, find the transporter capsule to enter the inner chambers and subsequently find and destroy the reactor.

On completion of this hazardous mission you then have another trip fraught with even more danger.

Never certain whether I had five lives or only four to squander, it did seem that a lot of playtime was spent blasting away at brick walls which were obviously built when bricks were 10 a penny.

The cleverly designed opening screen with a scrolling message along the bottom line leaves no doubt about the actions to be taken.

User-friendly throughout, an instruction page which is clear and concise is followed by a brief demonstration routine. Being largely an amalgamation of maze games and shoot-outs the program lacks any originality, but is nevertheless a good implementation of this genre.

This is grossly overpriced for this type of game, which is now outdated with the advent of 3-D graphics and expansible use of the Amstrad's sophisticated sound commands.

If you need a laser blaster then this is as good as any other, but that's all.

If you need a laser blaster then this is as good as any other, but that's all.