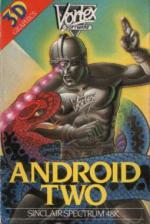 In the film industry they tend to say that sequels are never as good as the originals, whereas in computer games the opposite seems to be true. If you bought and played Android 1, then you may be in for a shock with Android 2 - it's not only better, it's staggeringly better! A lot of recent releases have featured wonderful graphics and it's unfair to compare one with another when the graphics often have to do different things, but overall our reviewers thought Android 2 had just about the best, possibly as good as any other game for the Spectrum to date.

The story is as old as the Spectrum itself - stop the advance of the Millitoids, survive the maze of death, rationalise the paradox zone, overcome the dangers of the flatlands and achieve all this before the departure deadline. No problem! Vortex describe this as a mindblowing action game and deservedly so.

It's hard to describe the screen display, because the area is huge, part massively convoluted maze, part open space within areas of the encompassing maze. The view is solid 3D, seen from well above and slightly to one side. The attract mode scrolls at a furious pace in a diagonal direction across the playing area, and gives a frightening idea of what is ahead of you.

The object is to destroy five Millitoids in each of the three zones. These otherwise pleasant creatures require three shots to the head. In carrying out this mission you must watch out for the numerous land mines, Hoverdroids (one blast), and Bouncers which are indestructible but very predictable. Android 2 is equipped with a head mounted photon blaster of unlimited power - he needs it! Good luck!

'If you have seen 3D Ant Attack then you will know that the graphics are great but that the game itself is not so good, well Android 2 is a game with great 3D graphics and is also a good game in itself. The animation is good, a well laid out screen, and generally a great shoot'em up game.'

'Every detail of this game has been polished, even the instructions are beautifully done. The sound is excellent and very characterful. It's such a massive undertaking that I'm sure people will be playing it for ages without ever getting anywhere near exploring all the maze. You have to watch out for mean landmines, especially in passages where the floor is obscured by the perspective view. Addictive because of the game idea and the fantastic graphics.'

'The game is very challenging, in fact I found it hard and good to play. Good graphics, with lots of movement and good value for money.'

Matthew Uffindel (as per Crash Back review in Issue 8)

Good graphics, with lots of movement and good value for money.