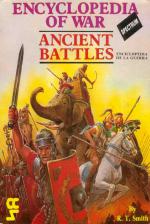 Robert T Smith has become a strategy legend for WWII games like Arnhem, Desert Rats and Vulcan (we won’t mention Cyberknights). However, for his latest game he’s gone several centuries to recreate epic battles of the ancient world. Now you can step Into the sandals of commanders like Julius Caesar, Alexander the Great, or even Attila the Hun.

Two tapes are present in the glossy, video-sized box. These contain separate Selection and Battle programs for 48K machines, a 128K program incorporating both of these, and four extra scenarios. A fifth scenario is automatically loaded with the game, while the extra large Chalons scenario only works on 128K machines.

If you don’t fancy one of the given scenarios, the easy-to-use Selection program allows you to set up your own battles (how about Hittites versus Huns?!). Any pair of 24 nations can be pitted against each other. Some nations also have a number of armies (relating to different historical periods / campaigns) to choose from.

The size of the battle is also variable. The smallest allows each army 750 unit points with which to ‘buy’ individual units, while the ‘unlimited’ option allows for epic battles with a total of up to 136 units (254 on 128K machines).

Only units applicable to the chosen nation can be selected, eg an Indian army has access to elephants. Selection of individual units is also not entirely free — minimum and maximum numbers for each type of unit are set. Unit types include various sorts of infantry, cavalry, spearmen and chariots.

Each of the five given scenarios has its own map. But for user-defined battles, a Map Designer option allows user-defined maps.

Once the battle is set-up, units must be deployed near the relevant edges of the map. Also, if an army has more than one general, each unit must be allocated to the command of one of them. This is important, as during play each general can only issue a limited number of orders to his units.

To save the time-consuming business of manual deployment, an auto deployment option may be chosen. But first, a battle plan must be chosen. Left, central and right sections of the army can either charge, advance or defend.

Control of each army may be by player, computer or shared between the two. This last option allows a player to control the commander-in-chief’s units, while the computer controls those of subordinate generals.

Players take it in turn to give orders. A cursor is used to select a unit, which can then either be ordered to move towards a cursor-set destination. However, each individual movement order (apart from units immediately adjacent to a general) uses up limited order points for each general. So to move units en masse, a unit can be ordered to follow another. Apart from being realistic, the limited number of individual orders makes for fluent play. Realism is also heightened by the delay of half or one whole turn before units far from their general carry out their orders.

Other options for a selected unit are a Report on the unit’s attributes (including strength (numbers), morale and fatigue), and G for details of a general — both can be in the same space. This is the only form of stacking permitted — normal units may not occupy the same space.

Once both armies’ orders have been given, simultaneous movement of units takes place. Shooting and hand-to-hand combat then take place. Units automatically fire at the nearest enemy unit. Hand-to-hand combat is also automatic between adjacent units.

After combat, some units may retreat or even be routed if they have serious losses. Routing units do not disappear, but instead change colour and gradually move towards the edge of the map. As no stacking of units is allowed, they also tend to realistically ’clog up’ the battlefield. Routing elephant units may even trample their own troops!

The simple order system is easy to use and makes play very fluent, so you shouldn’t have to wait too long for a human opponent to make his moves. Despite this simplicity, the results of combat depend on a large number of conditions. For instance, the likelihood that a unit will rout even takes into account whether other friendly units can be seen routing.

Ancient Battles is a masterpiece of programming with a wide range of options. As usual with RT Smith’s games, the game is accompanied by a comprehensive rulebook and another booklet containing historical notes on all the scenarios and armies present. Although graphically simplistic and lacking the complex order system of RT Smith’s previous games, pitting armies of your own choice against each other is a fascinating experience and a great way to learn a bit of ancient history at the same time. Yet more good news is that the author is planning to produce a sequel, incorporating armies from 500-1200 AD.

A masterpiece of programming.