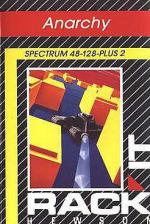 Anarchy is one of Hewson's new 'Rack-It' budget releases and while it was loading I waited in fevered anticipation as, for me, the name Hewson has always spelt "Quality Game" (I never was very good at anagrams. Haw haw). Oh, and by the way; it is brilliant.

An overhead view game (a la Motos or Dandy), the object is simplicity itself. You, a little tank, have to zwizz about an alien complex shooting at weapons containers (well, sort of coloured blocks actually) while avoiding roving enemy droids with whom contact is fatal. Once you've taken out all the blocks the lights of the complex phase on and off (making it hard to see where you're going) and you have to locate a small black 'Exit' icon. Once on it you're safe and can watch as your score is boinged up in proportion to the time remaining on your clock. What? I didn't mention the clock? Oh well, there's a clock! ...you have two minutes per level.

The frustrating thing about knocking out blocks is that the tank cannot fire at blocks it's touching, and as some of the gaps twixt wall and block or block and other blocks are just one tank's width, there's an element of logic as to just where to place yourself. Simple logic, admittedly, but not so easy when the clock's ticking away and you've got three enemy droids up your doo-dah.

Another brilliant thing about Anarchy is that it's got a replay facility. I always thought I was a pretty quick thinker, but I squirmed with embarrassment when I sat back and assayed my first few attempts at level three. What a moron - talk about indecision. I promptly burned my application for The Krypton Factor.

The programming of Anarchy is superb, but then what would you expect from Andrew Hewson's protege, Dominic 'Don't-you-think-I-look-a-bit-like-that-whizz-kid-computer-buff bloke-from-the-Max Headroom-TV-movie?' Robinson...? Everything's good - the colour, the graphics, the sound, the control response and the difficulty (I'm stuck on level six at the moment but as I said, I'm obviously a moron). One thing I must add is the apparent size of the playing area on each level. I think that it's two screens wide, but thanks to a nifty sort of quarter-screen scrolling technique, it really seems like four. Also the high score table screen is pretty wicked too. All in all this is a thoroughly playable little game, and at just under three quid I'm afraid you'd have to be a bit of a plonk to not check it out: I almost gave it a megagame rating.

Top-notch cheapie from Hewson's Rack-It label and the fertile brain of Dominic Robinson.

A brilliant, thoroughly playable little game, and at just under three quid I'm afraid you'd have to be a bit of a plonk to not check it out.