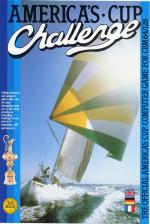 For the first 133 years of its history, the America's Cup was little more than an excuse for an upper class binge.

The nobility behind the New York Yachting club invited challenges from their equally rich counterparts in Britain, Europe, and Australia to come and take them on to win the trophy. All were soundly beaten yet nobody really minded as they all had a "super time" and the rules were rigged anyway.

The trophy they were competing for was commissioned by Sir Thomas Lipton who also staged the first World Cup and is another example of British eccentricity at its best. Three years ago, everything changed when Australia II won it with a revolutionary new keel design (that's the bit that sticks into the water from the bottom of the hull).

By the seventh and deciding race, the world was gripped with yachting fever as the Australians won. They celebrated with amber nectar and the Americans drowned their sorrow.

That changed the nature of America's Cup racing, turning it into the most expensive and bizarre of all sporting events.

In the three years between the antics of 83 and the 86/87 challenge in Fremantle, Australia, a record number of countries designed yachts, trained sailors and raised money as the event became a matter of national pride.

The venue grew from part of the Australian outback to a cross between New York and Las Vegas. If the Australians don't retain the trophy, this billion dollar city will sink bank into obscurity, but if they win...

Engineers, sailors and computers have been busy designing, building and testing new hulls and keels to try and make their yacht a little quicker than the others.

The competition is supposed to be for twelve metre yachts but since this is only based on an equation comparing masts to hulls and so on, some competing yachts are over 21 metres long!

The British challenge comes in the form of White Crusader. There was a White Crusader II featuring a revolutionary new hull design which unfortunately became a revolutionary new flop when they actually tried to sail it. So the original Crusader with a very ordinary hull design and the now compulsory Australian-style keel design joined the Americans, French, Italians, Canadians and New Zealanders in the incredibly long and involved competition to decide who will challenge the Australians for the America's Cup.

Both competitions are a series of round robin leagues in which every yacht races each other with the points for winning increasing with each round. The top four challengers then meet in the semi finals and final to find an eventual challenger.

By January this will be over (the British challenge having now faded as in every sport we invent) and the seven race challenge for the cup will be on.

Each race takes about three and a half hours and is hardly a spectator sport and so the parties continue with only the occasional interruption to check on the race position at the end of the course's eight legs.

The Australians desperately want to keep the trophy as much as the Americans want it back. One American syndicate want the trophy so badly that they are spending a staggering 16 million dollars to get it. Now courtesy of US Gold you can challenge for the cup for only £9.99.

Luckily, the game speeds up the action (a race lasts about fifteen minutes) and dispenses with the lengthy qualifying stages and is based only on the best of seven races final.

Yacht racing is a complex business with races won and lost over the vital sail changes. Sails are selected or joystick and winched up to down by cranking the joystick around either clockwise or anti-clockwise in movements totally alien to games players. These are almost as alien as the yachting terms of genoas, gibes, spinakers and tacks that you will have to master if you're going to win the trophy.

You race against either a human or computer opponent on a series of screens that show the yachts as they race around the course and their positions on the all-important course map. Using this you an judge your tacking angles to arrive at the market posts before your opponent.

Steering the yachts around the course couldn't be easier. Getting round it quickly is the problem.

The secret lies in choosing the right sails at the right time, particularly when you're sailing into the wind. Unfortunate, since the course is designed so that you have to sail into a 20 knot wind for most of the race!

To win the race and the Cup you will have to learn the curious terms and tactics involved in this bizarre competition. Until then, concentrate on the parties.

Steering the yachts around the course couldn't be easier. Getting round it quickly is the problem. The secret lies in choosing the right sails at the right time, particularly when you're sailing into the wind.