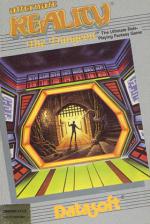 Standing in a room of gloom staring into the misty portal is a character. His memories of the visitation by an Alien ship and consequential capture flood his mind. Why him? What do they want? He knows his destiny lies behind that forbidding portal...

A field of pure energy plays amid the doorway and above it a panel of constantly changing numbers flicker. As the character passes through, the digits freeze and his stamina, strength, wisdom, charisma, intelligence, skill and hit points are set for the quest which lies beyond. The next chapter in the Alternate Reality saga is about to begin.

Those who have successfully played Alternate Reality: The City can load their characters from that adventure into the new Dungeon scenario - stats and all. Newcomers have to create a new character from scratch.

The quest takes place beneath the city of Xebec, in the dark, gloomy corridors of the Dungeon. Within these hallways of horror are many places of interest, populated by strange and powerful beings - some friendly, and some not. Trolls and Goblins who dwell beneath the city are deadly - and should the character decide to ally with one species, the other automatically becomes his sworn enemy. However, it is possible to play one against the other if your character is cunning enough.

The necessary supplies needed to stay alive are available at retail outlets, or can be got by less honest actions - mugging fellow dungeon dwellers, for example. The character is only capable of carrying a limited number of objects, so a little decision making is required to ensure a useful inventory. Food, water and clothing and a compass are essential belongings if any progress is to be made. Magic spells, potions, trump cards and unusual weapons, such as gladius and a kukri, are also items which help keep the character alive.

The adventure is depicted in three main areas. The top part of the screen displays the character's stats and gives a brief description of the location which he's in. Below this is an illustration of what the character "sees", whether it be the dungeon walls, the crystal caverns or inside one of the many buildings. The display scrolls as the character walks, and it is possible to turn in all four compass directions from the point where the character stands.

The character's present condition is displayed at the bottom of the screen, along with the amount of food and water currently carried, any option menus and any relevant messages. Atmospheric music and suitable sound effects are also present throughout.

Options such as casting spells, using items, getting items and saving or loading a game are open to the player at any time during play, although some actions may only be carried out during encounters or when exploring. Pressing the RUN/STOP key aborts any decision made by the player should he have second thoughts.

There are four levels to negotiate, with the objective being to find the Oracle of Prophecy and escape the Dungeon, and therefore be able to continue the quest in the next part of the Alternate Reality. There are two ultimate goals to the entire series - either to return to Earth, or take revenge on the captors.

Although my first few characters didn't last long, I thoroughly enjoyed experiencing the dungeon lands of Alternate Reality - in fact, it was this game that really started me playing computer RPGs properly!

After some pratice (and a little luck) I managed to build up a char and am hoping that one day I'll finally be able to escape. The 3D graphics instil an uncanny atmosphere, and getting completely wrapped up in the action is incredibly easy.

Alternate Reality's beauty is that it is a doddle to use yet it still manages to remain totally comprehensive. The map is extremely large, and there are plenty of locations to explore and creatures to interact with.

If you've got the time to spare, Alternate Reality offers a whole new world to explore. Try it!

The title screen and music are extremely impressive, as is the character formation sequence. Strolling through the dungeon is thoroughly enjoyable and there's plenty to do and lots of characters to meet. Mapping is essential, and plenty of thought is required as to what to buy or steal. Objects themselves present puzzles, and a lot of fun is gained from working out what to do with things that are picked up.

Alternate Reality: The Dungeon has many game features which are well executed and should keep role-players questing for 'eons' to come. I'm now eagerly awaiting the next in the series!

Graphics 92%
Wonderfully atmospheric and totally convincing throughout. The 3D gives an excellent feeling of 'being there'.

Atmosphere 89%
It's easy to get totally caught up in this convincing alien environment.

Lastability 86%
Lots to see and do - the dungeons should keep most role-players chained to the Commodore for weeks.

Overall 85%
An excellent RPG which offers plenty of depth, variety and interaction.

An excellent RPG which offers plenty of depth, variety and interaction.