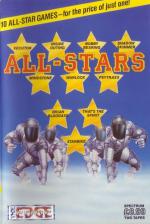 The Edge have set themselves quite a reputation for quality games and it really shows in their latest release. Games ranging as far back as Starbike and Psytraxx are featured, right up to the minute titles like Inside Outing. A full rundown, from Tape 1, Side 1. Bobby Bearing. The first isometric ballgame to feature CurviSpace. Starring a ball trying to rescue some more balls. Phnarr phnarr indeed. Brian Bloodaxe. Viking warrior set in the 20th century in this platforms and ladders escapade with more than a hint of Monty Pythonness about it. That's the Spirit. Ghostbusters all over again. Starbike. Jetman comes back to life on a moped. Psytraxx. The very first game to feature over 1,000 screens, all exactly the same. Xecutor. SU classic colourful blasting action and one of the all time greats. Shadow Skimmer. Technicolour Uridum, basically. Mindstone. More icon drivel, whoops, driven adventure fun. Inside Outing. The only isometric exploring game ever to make Graham "Butch" Taylor cry with frustration as he was savaged by a canary, again. Warlock. Another 3D isometric jobby, except that this time, you play the baddie. I don't remember writing the quote on the back of the box, though. I wonder where they got it from. Competent compilation that just oozes quality with a capital SU. If you have a spare £9 note in your pocket, I think I could safely recommend you to pick this up.

Good selection of titles ranging from the average to the excellent. A wise choice for purchase.

Good selection of titles ranging from the average to the excellent. A wise choice for purchase.
Logout