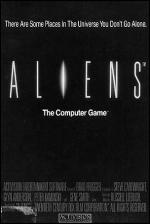 The first section deals with the space marines' drop to the planet, and as pilot, it's your job to guide the drop-ship through a series of concentric circles to the planet surface. A 'Profile Compliance' indicator tells you when you are straying off course - veer too far and the drop is aborted, forcing you to start from scratch.

Successfully landing the craft presents you with the next problem. Four Marines have become lost in the maze-like processor plant, and are now surrounded by Aliens. It's up to you to guide the team to the safety of the Armoured Personnel Carrier (APC). A main view-screen shows the Marines' immediate surroundings with a motion tracker displaying the aliens' relative positions. A bio-monitor screen indicates each Marine's status, and flashes red to show that Aliens are about to attack. Annihilating an attack wave with your Pulse Rifle allows progress to the next location. Failure results in the death of the relevant Marine.

In the next stage, the surviving troops are cornered at the rear of the operations room, with the aliens advancing thick and fast. The only way out is to torch a hole through a two-ton steel door. While the majority of the crew shelters in hiding, a single Marine fends off the horde with a flame thrower. Should an Alien pass, one of the remaining Marines is captured and used as an incubator.

Having escaped from the operations room, the troops scramble into the air ducts and attempt to find their way back to the dropship. An overhead view of the ducting is given, with Ripley and Newt displayed as coloured squares, surrounded by up to eight white dots representing the remaining Marines. When an Alien attacks, a suicidal Marine can be left behind to explode a grenade and kill the Alien. When all the Marines have been killed any further attack proves fatal.

On the way to the drop-ship, Newt is captured by the aliens and held within the processor plant - a determined Ripley ventures into the atmosphere processor to rescue her. A range finder counts down the distance between Ripley and Newt, allowing you to home in on the child. Ripley has 99 rounds of ammunition, and flares which can be dropped to guide her back to the elevator. Aliens are frequently met within the plant and can be blasted to bits or dodged to save ammunition.

When found, Newt follows Ripley back to the elevator. Here the Queen alien appears, and must be avoided before the two can reach the waiting drop-ship.

Eventually, the surviving members of the troop reach the mothership, and the relative safety of the docking bay... where the final confrontation between Ripley and the Queen Alien takes place.

Donning a power-loader, Ripley attempts to throw the Queen Alien through the airlock. The Queen is stunned by repeated blows from the loader's arms - she soon tires and can be picked up and dumped into space.

When the Queen is dead, you can retire to the quiet of the hypersleep capsules and begin the long journey home...

The English interpretation of Aliens captures the film's atmosphere beautifully. This American version however, is slick and over-produced - and that's not a compliment. The six sub-games are extremely simple, and though related to the cinematic action, they fail to capture the most important aspect of Aliens - the atmosphere.

It's enjoyable enough, but each section only offers about half an hour's entertainment. The nail in the coffin is the multi-load system... Buy British and stay happy.

I was immediately impressed by the on-screen presentation and in-game film-style credits. However, the six sub-games don't live up to initial expectations, being simplistic and sometimes laborious. Some of the sections are quite playable, but real atmosphere is sadly lacking.

Aliens remains a rehash of previously used Activision concepts strung together and neatly packaged to fit the bill. This is a shame, as the film is tailor-made for a good game - and this isn't it.

Presentation 83%
Good instructions and packaging. Some annoying delays experienced during play though.

Graphics 70%
Range from excellent to average. Decent digitised pictures but otherwise nothing special.

Hookability 65%
Easy enough to pick up and play, but it's irritating having to wait for introductory screens to finish.

Lastability 53%
Some sections take longer to master than others, but all are limited.

Value For Money 63%
Six simple games for the price of one.

Overall 66%
The enormous potential of the film hasn't been utilised, but the package is good in its own right.

The enormous potential of the film hasn't been utilised, but the package is good in its own right.