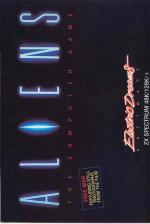 This sequel of the game of the film is unique as both are better than the originals.

Games based on films or TV programs are usually awful. Titles such as the primitive Back To The Future and the awful Knight Rider, which was completely off-the-track, sold well but soon disappointed their players. Aliens is one that won't.

The film is the sequel to the 1979 monster hit in which the crew of the star freighter Nostromo was chomped by a single alien. Warrant Officer Ripley (Sigourney Weaver) was the sole survivor and finally killed the Alien before escaping in a hyper-sleep capsule. She is finally rescued 57 years later and is taken to a space station orbiting above the Earth. There she is interrogated by Company officials who demote her and ridicule her story of Aliens that gestate inside human hosts.

Ripley then discovers that an Atmosphere Processing Plant was established on the planet Archeron. The same planet that contains a ship load of Alien eggs waiting to hatch. Now, ten years later, all contact is lost just a few days after Ripley's return.

The company persuade her to go back to Archeron with a squad of space marines. There they find the plant is packed full of Alien warriors, face huggers, the 20ft long Alien mother and Newt - the compulsory cute kid. The game begins as the squad enter the plant.

You lead the team from the safety of the Mobile Tactical Operations Bay which is outside the infested plant. From there you control the terrified but fighting Ripley, Lieutenant Gorman who is likely to crack up at any minute, quick reacting Corporal Hicks, the android Bishop, tough and reliable Private Vasquez and Burke, the company man. With this motley crew you must wipe out the Aliens and their mothers (Yes, there's more than one in the game just to liven things up!)

You can control your squad either directly or by issuing movement orders. I found the direct method to be better, although slower, and could safely ferry my crew through the base. If you issue orders you run the risk of Aliens attacking your crew while you're not controlling them and they might have been eaten before you get a chance to save them.

The screen display shows the view from the helmet camera of the crew member you've selected and their smart (computer aimed, video targetted, automatic weapon) gun sight, their ammunition level and the bio-monitor bar and room number for each crew member.

By controlling the gun sights, you can look around the room you are in although your fellow marines remain invisible. The doors open automatically unless the lock mechanisms have been blasted but even then you can blast your way through by taking out the door with your smart gun. A locked door may hold back the Aliens for a while but when they finally break through you'd better be ready for action.

Fighting Aliens requires accuracy and timing. If you stumble across one or they find you, your proximity alarm sounds and you've only got a few seconds to spin around to find it. A single shot to the head is enough for the warriors or three to the body but you'd better be on target as the Alien will attack as soon as you fire.

Even when you've killed them, the Aliens can still be deadly. Fry an Alien by a door and you risk leaving a pool of its deadly acid blood blocking the way. It will eventually evaporate but it may be too late. Wherever there are Aliens you face the threat caused by Bio-mechanical growth. This grows all over the walls and spreads. If you don't control it (by frying it) it will spread into the air ducts, filling the base with face huggers and eggs. If it overruns the control room or the generators, your mission will become almost impossible as the lights will fuse and you'll be plunged into darkness.

I found the best tactics to be to ferry your crew room by room through the base taking it in turns to be the first to enter the next room. This gives the others a chance to recover while you fight any lurking Aliens.

Although the game is supplied with an incredibly detailed map it often helps to blast doors and locks to mark the route through the base.

The first step is the armoury where the smart guns are automatically recharged... then it's onto the control room and generators to clear the bio-mechanical growth before a final showdown in the Queen's chamber.

Throughout the entire mission, you must have almost total concentration as the slightest panic could lose you half your crew! This superb gameplay captures the atmosphere and tension of the film more so than any other licensed game.

A pause button can be used to give yourself a break and check the map, but there's no going back. As you get further into the game the Aliens will discover your presence and mount stronger and stronger counter-attacks until you're swamped in eggs, warriors and bio-mechanical growth.

An excellent game of a superb film. Both are highly recommended.

An excellent game of a superb film. As you get further into the game the Aliens will discover your presence and mount stronger and stronger counter-attacks until you're swamped in eggs, warriors and bio-mechanical growth.