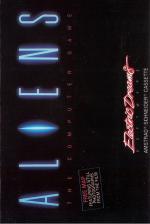 You shuddered at Alien the film, you couldn't tear yourself away from its sequel, and now you're going to be utterly terror-stricken by the computer game. It isn't gory, you'll be pleased to hear, but it has atmosphere that will envelop you and turn you into a twitching, panicking wreck. I kid you not.

If you want to know the plot, go see the film. Suffice it to say, you control six characters inside a base crawling with aliens. Your task is unspecified, except for staying alive, but if you see the film or study the game map it should be obvious. When you feel up to it, you can enter the game and be greeted by an eerie, foreboding welcome if you've got the sound turned up.

Throughout the game there is a soundtrack; not musical, but full of effects, noises and rhythms. It sets the atmosphere beautifully.

You start with the six characters all in the same room; the soundtrack seems to warn you of the nasty surprises that lie in wait.

You control one character at a time. The top half of the screen is a view of what the character sees, relayed to you through a camera. The bottom half is a status display showing who you currently control, his or her health, ammo, and the status of the other five characters. Each character carries a weapon that can be aimed using a cursor on the camera view, but this has only limited ammo.

You can control a character only for a limited time because energy runs out. When it has gone you'll have to switch to another character while it builds up again. This means you can't just guide one person through the complex without stopping. Indeed you'll quickly realise that the best strategy is to try to move everyone through in support of each other.

Each location consists of futuristic panelling and doors, which you can scroll jerkily across the screen using the cursor. It's as if you're swivelling around in the middle of the room. You can move through the doors into the next room, but you'll need to refer constantly to the map and concentrate hard in order not to become disoriented.

If you enter a room containing an alien the proximity meter sounds an urgent warning and throws you into a panic. You have to scroll quickly around the room to find the alien walking around and then shoot it. If you leave it too long or miss with your shot, the alien will head straight for you. If you miss him again, the crew member concerned will be the main course for alien supper.

If you don't shoot at an alien it will eventually capture the crew member and after a time impregnate her - or him. At this point they are without hope but before impregnation you have the chance to rescue them by getting another crew member to the scene to kill the alien. Dealing with aliens is the hardest part of the game: with sirens sounding and an alien heading straight for you, panic takes hold every time and can easily make you miss your shot.

Apart from the exploring and fighting, there are several other important features. Bio-mechanical growth that appears in rooms containing aliens will grow and attract more aliens and cause some other nasty side-effects. Aliens can release acid blood when shot; this can block your path because it kills on contact. Doors can be locked or blasted through. You can even program crew members to move through rooms automatically while you're busy controlling someone else.

I actually enjoyed the game more than I did the movie: it's got so much atmosphere that you really get totally involved in the action.

The only niggle I have with it is the jerky scrolling, but this won't spoil the gameplay. It's a real tough nut to crack. Although the gameplay seems simple at first it requires a good deal of strategy to get very far.

Fantastic! Aliens is a game I can really appreciate, having seen the film. Snippets of music, unearthly clanging noises and alien sounds pulsate through the speaker. The atmosphere is intense and will hold you in a deathly grip. When spotting an alien, I stabbed viciously at the fire button, terror and panic so strong it caused irrational feeling. This is one game I'm going to see through to the end...

Aliens requires fast action and plenty of strategy. The atmosphere is thicker than Los Angeles smog.