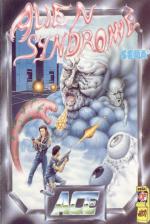 Maybe this game should be called Alien Syringedrome 'cos it takes place in a genetics laboratory you see. Then again, maybe it shouldn't 'cos' in this laboratory things have gone rather badly wrong. The quiet complex, usually populated by boffins gently engineering various species to mankind's needs, has suddenly become a fraught danger zone, over-run by horrific, bloodthirsty mutants (sounds like the YS office to us!). Normally, the authorities would just seal down the labs and blow them to kingdom come, taking all the nasty beasties with it, but the scientists working there are trapped (shock, horror!). So its up to you to get in there and rescue them before a time bomb (which is set on arrival) goes fadoooooom! and turns the monsters, scientists, rescuers and all into a few unsightly stains (eugh!).

Like the arcade game, there is a two player option, which has the obvious advantage of doubled killing power, but you have to be very wary, because letting rip with your blast-o-fry flame thrower (or whatever other instrument of terror and death you just happen to come across) rubs out your partner with just as much efficiency as it does the mutants. Scattered around the playing area, behind special panels, are weapons galore: a flame thrower, a bomb launcher, a lazer, a fireball flinger, and the inspiringly named 'options which tag onto you and guard your behind, firing when you do. Only one weapon and two options can be held at a time which is annoying. We happen to love blazing around in a frenzy of destruction with half a dozen weapons going at full blast (it's messy, but fun!).

There are loads of scientists scattered around the first level (shown on the score panel as companions); find ten and you can progress to the next level (leaving the rest behing to a sticky death - sick!). Here the scientists become harder to find, and the aliens are slightly more bent on killing you! The exit from this level leads into another room in which floats a vile and vast mega-monster who does his very best to wipe you all over the floor. These fairly disgusting entities are portrayed beautifully with liberal use of colour and pretty animation, something which is missing from the main figures of the game where the figures are tiny, and the quarter scrolling (where the screen only moves when you get close to the edge) can create problems when you're dangerously close to hundreds of mutants just off screen!

Despite the several quite minor problems already mentioned, Alien Syndrome is a wonderful romp through some great carnage. This romp is made far more enjoyable by the two player option, although we think it'd save a lot of teeth gnashing if the two players were impervious to each other's fire, like the scientists seem to be.

Graphically, the first stage of each level is adequate without being elaborate, but the second more than makes up for this. Colour is used brightly throughout, but the characters are disappointingly small, unlike, Gauntlet, a great deal the screen is made up of scenery and the score line, so the action is a little cramped, though it manages to be fast.

Playability , the most important bit, is brilliant! The addictive content is also very heavy, until you start getting onto the higher levels where the task gradually becomes more and more tiresome. That said, however, the difficulty level is geared to make it a challenge - we certainly didn't make it out of the first few levels in a hurry. We also reckon the one player game is slightly easier to make progress on, though it's somewhat less fun.

Alien Syndrome represents quite reasonable value: it has a future on the shelf, as opposed to the pile in the box on the floor!

Alien Syndrome represents quite reasonable value: it has a future on the shelf, as opposed to the pile in the box on the floor! Coin op conversion with squishy aliens to shoot and silly scientists to collect.