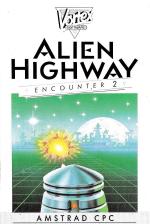 Subtitled "Encounter 2" this is the follow up to the immensely successful Highway Encounter and is once again set on a roadway where you have to battle alien forces. The general format is the same as before but many important changes and new features have been made to maintain originality and make this a knockout game.

Having beaten off the attack on Earth you are now attempting to destroy the alien citadel that lies at the end of 30 zones of roadway. The road runs from the bottom left of the screen to the top right and as before is packed with nasty hazards. These have to be negotiated in your dustbin lookalike Vorton while pushing along the Terratron that will destroy the alien city.

Along the route the Terratron has to be energized at seven regeneration stations, otherwise it will not work when you reach the final zone. The Terratron can be pushed all over the roadway instead of keeping to the centre-line like the Lasertron in Encounter. This gives you plenty of scope for movement but also makes control and progress up the highway much harder.

Fortunately the Terratron slides easily though. This means that even though it may look like you've got it stuck somewhere it can still be pushed diagonally on the 3ide to move it. You'll need that skill quite a lot because you're guaranteed to got into a lot of tight spots.

There's only one Vorton to push the Terratron because the "lives" system of the previous game has been done away with in favour of an energy gauge. This is depleted by contact with many items but replenished when the Terratron hits a regeneration station. When it reaches zero the game ends. The end can also be brought about by exhausting the game time limit, although this is a bit more generous than on Encounter.

There are lots of enemies, including some nasty surprises for even the best of Encounter players. The most noticeable is that the edge of the road has been electrified and rapidly drains your energy when run into, making positioning much tougher. There is another static hazards that drains energy fast - flamepoints.

Both these features have to be avoided at all costs or your game won't last long.

The moving hazards are less deadly individually but wage a dangerous war of attrition. They have some nasty characteristics like homing in, ducking, attacking when your back is turned or your laser's empty and trapping the Vorton in some lethal spots. Some can be shot with your front mounted laser, others will have to be blocked or scooted past.

There are barrels similar to the ones in Encounter that can be moved around as blocks but these appear randomly so that there won't always be one when you need it. Tho screens also appear in a random layout with each new game, although there are groups of screens that stay together and the tough ones will bunch towards the end of the road.

The animation is great on many of the features and once again there's a nice end game sequence, although it's not quite as impressive as the Encounter one. The aliens are wonderful when they move with craning necks and ducking action. The Terratron also gets in on the act when it is regenerated because what looks like a hand pops out of it to pull its lid down.

The control is a little finicky at first but like Encounter it becomes maddeningly addictive after just one game. The aliens and obstacles are even better than before - more deadly too. The random features make the game less predictable - you never know what to expect - and even Encounter players will find this a tough new challenge while the newcomer will undoubtedly marvel at the sheer genius of the game.

N. Has many similarities to its predecessor.
N. Newcomers may take some time to learn the ropes.

The game's practically black and white anyway, so you're not missing much.

Maddeningly addictive - you've just got to see the end.