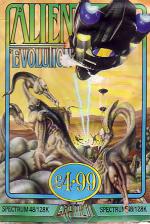 It revolves around a small spacecraft called Cyborg 64. All the humans have retreated underground, and all the aliens have decided that Earth is now one big adventure playground, and won't go home. They won't take a hint, and they can't be talked to, so it's up to you to wipe 'em out! (Heehee... Zap!)

This is Gremlin's second release at a cheaper price, and boy is it good! You wander about, firing at aliens, laying traps and generally acting in an inhuman way, all so's you can watch them die. Mind you, this is a bit of a problem - they don't actually die, but evolve into a higher life-form, and you have to kill that too, and so on. When one level is clear, you're on to the next.

The layout's slightly Ant Attack-ish, as I've said, and you'll find teleporters to carry you around. Also, if you find yourself out of ammo, there are bubbles to push in front of you as a shield - these too can kill aliens. There's also a square in the game, where letters of the alphabet appear. When I stood on it, the letter T flashed up then the game continued. Dunno what it meant, but it was pretty smart.

The music is good, the graphics are good, and, at the price, it's terrific!